Australia Needs a Submarine, But It Can't Agree To Build One 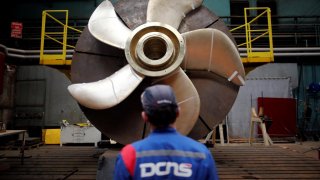 ‘This is about the security and the future of our nation.’

‘The consequences of the failure to manage the Future Submarine Program properly are profound. Australia is now faced with the most wicked problem. We have seen continuing delays in the build from [France’s] Naval Group … But any thought of ending the contract with Naval Group and pursuing another alternative would obviously be very expensive and involve enormous delay of itself. The Morrison Government has put Australia’s national security between a rock and a hard place.’

Both sides of Oz politics love what submarines offer Australia.

Subs are a fundamental element of the bipartisan consensus on defence. But the love quickly becomes agony and angst when we turn to building them.

For a couple of decades, the problems of the Collins-class submarines drove governments nuts.

In office, both Labor and Liberals hated the complexity and cost of the Collins. The dud subs have slowly transformed into six beaut boats, but the agonising journey left deep scars on the political and defence classes.

The Collins was a wicked problem (a complex, interdependent challenge with no ‘stopping rule’; solving one aspect leads to other problems). Now, getting the 12 Attack-class boats is equally wicked.

The strategic importance of the subs is matched by their degree of difficulty. Vital yet vexed.

The strange submarine saga of the past decade has significant sliding-door moments, when decisions were made (or surfaced) to become today’s reality, while other different futures didn’t get through the door (the possibilities that sank).

The Collins agony/angst and the political choices of the past decade have shaped where we are now. Give this a personality—call it Industry Oz, expressing the determination to build our own subs, the road we’ve been trudging for 40 years.

Industry Oz could have several versions, and some choices we’ve shunned or bungled look like valuable, missed opportunities.

Contrast Industry Oz with another personality that nearly walked through a different door to a different place: Customer Oz—buying the new submarines off the shelf overseas. (A future sliding-door possibility—the nuclear sub option, Nuke-Powered Oz—will surface later in this saga series.)

The might-have-beens of Customer Oz offer contrasts that can clarify the costs of choices taken. The way Australia has pursued its partnership with France and Naval Group has hints of Customer Oz, thinking more like a buyer than a builder. The customer has discarded options in dealing with Naval Group that you would have expected a hard-headed Industry Oz to have kept available.

The flippant version of Customer Oz is that it would be cheap and cheerful. The boats would be cheaper. We’d get ’em quicker. Australia would not be the builder, merely the buyer. Cheers! Sign the cheques, police the schedule and sail them home. We’d have much less control over what we got, but the customer would off-load lots of angst and responsibility.

The serious version of Customer Oz is that it would be totally defence-driven, stripped of the ambitions and compromises of industry policy. The focus of Customer Oz would be the defence need in a darkening strategic era, operating within the parameters of quality and price. The spend would be defined by defence, not twinned with domestic economic imperatives.

Back in 2014, Customer Oz was our submarine future. Last week’s column outlined Tony Abbott’s determination to buy Japanese subs. Abbott was set to create a Customer Oz future for subs.

We know now that Abbott lasted only two years as prime minister (2013–2015). In 2014, though, that’d have been a bizarre prediction. Slip through the sliding door to see a different reality unfold.

Over two elections (2010 and 2013), Abbott as opposition leader had clawed 25 seats from the Labor government. As the Liberal minister Christopher Pyne observes, the comeback Abbott engineered ‘was a remarkable achievement’. Stress that: remarkable. Abbott was only the fourth Liberal leader to take the party from opposition to government. The others were Robert Menzies, who stayed as PM for 17 years; Malcolm Fraser, PM for over seven years; and John Howard, who was PM for nearly a dozen years.

Political arithmetic and history suggested Abbott would be a two- to three-term PM, delivering a Customer Oz future. Recall that in 2014, Abbott’s defence minister, David Johnson, declared he wouldn’t trust the government’s Australian Submarine Corporation to build a canoe. That explosive‘rhetorical flourish’ was quickly disowned, but the Abbott government was paddling towards a Customer Oz outcome.

Australia’s navy hated the Japanese sub, disliking the technology and damning the boat’s range. If Abbott had lasted six to nine years as PM he’d have prevailed over the navy, and Customer Oz would be today’s reality.

Instead, the sub saga became a minor strand of the dramas that saw the Liberal caucus depose Australia’s 28th PM after he’d had only two years on top.

In turning away from Abbott, the Liberal government gave a passionate new push to Industry Oz, setting off towards today’s wicked reality. That vexed place will be explored in the next column on this strange submarine saga.

This article by Graeme Dobell first appeared in The Strategist on August 17, 2020.