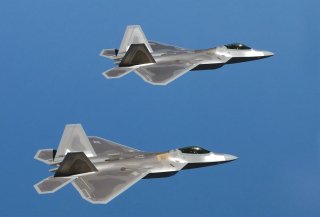 Here’s What You Need to Remember: In confronting the growing challenge posed by a much more capable PLAAF, the RAAF needs to think in terms of hemispheric airpower projection.

A recent test flight of Boeing Australia’s Airpower Teaming System, the second such flight in the ‘Loyal Wingman’ program, which currently has two test aircraft, saw the first aircraft retract its undercarriage for the first time and the second aircraft take its first flight. A total of six have been ordered, with three to be acquired by the end of 2021. A new final assembly is to be established at Wellcamp Airport near Toowoomba in Queensland, providing a boost to the state’s defense industry sector.

This is an important milestone for the test program of the new capability that demonstrates developments that may be more important for the Australian Defence Force than the acquisition of nuclear-powered submarines in 20 years’ time.

The Loyal Wingman is groundbreaking in a number of ways. First, and perhaps most important, it is the first combat aircraft developed and designed for the Royal Australian Air Force since World War II. It represents a new type of capability for the RAAF through crewed–autonomous teaming technologies, allowing aircraft such as the F-35A Lightning II, F/A-18F Super Hornet and E-7A Wedgetail to ‘plug and play’ with the Loyal Wingman as a networked force. It’s set to offer ‘fighter-like performance’ with a range of more than 2,000 nautical miles (3,700 kilometres) and a modular design to allow a range of different types of missions including intelligence, surveillance and reconnaissance, communications relay, and both kinetic and non-kinetic strike capabilities. Its use of smart and trusted autonomy will mean that it’s not a ‘remotely piloted’ drone but operates with a high degree of independence alongside crewed platforms without adding needless burdens to aircrew.

With the assembly facility in Queensland, the Loyal Wingman project creates the potential for a flourishing aerospace industry that supports not only the manufacture of the aircraft itself, but also the rapid development of new types of air combat capabilities.

It’s this future development potential that needs to be explored quickly. In the context of the AUKUS agreement, much attention has been placed on Australia’s decision to pursue SSNs and the challenges of getting them within a reasonable timeframe. But there’s a strong case to be made that Australia can’t afford to stand still on long-range deterrence and strike while waiting potentially decades for the SSNs to arrive.

An alternative path for the ADF to project power needs to be considered. Developing and evolving a second-generation Loyal Wingman is a logical next step.

The first-generation Loyal Wingman that is now being tested is a small tactical aircraft which will offer the RAAF greater combat mass than it is currently able to field. Quantity has a quality of its own, and Australia’s approach to RAAF force structure needs to break away from traditional sizing limitations that have been largely static since the 1980s and the arrival of the F/A-18 A/B ‘Classic Hornet’. It’s time for a larger and more powerful air force in the face of growing threat from a rising China. The Loyal Wingman gives a path to that larger future force.

Alongside greater mass must come greater range and performance. The Loyal Wingman’s declared range of 3,700 kilometers would translate to an unrefueled combat radius of approximately 1,200 kilometers depending on payload and mission profile. That’s roughly comparable to that of the F-35A. That range does need to be extended, in order to solve the challenges posed by the extensions of China’s anti-access and area-denial envelope.

Ideally, this challenge would be eased via host-nation support or through airborne refueling, but it’s possible that support from countries in the region won’t be forthcoming in a crisis, particularly if they’re pressured by China not to offer it.

There are also challenges when it comes to aerial refueling. China’s People’s Liberation Army Air Force is developing longer-range capabilities. The Pentagon’s 2021 China military power report notes the continued development of the PLAAF’s long-range J-20 fighter. The Royal United Service Institute’s Justin Bronk notes that the J-20’s mission is to attack vital combat-enabler platforms such as the KC-30A refueler and the E-7A Wedgetail early warning and control aircraft.

The J-20’s range of up to 2,700 kilometers means that, if deployed to bases in the South China Sea, it could potentially strike airborne refuelers operating out of northern Australia. The PLAAF’s long-range bomber capability is also being rapidly developed. The H6N bomber is now operational and can carry air-launched ballistic missiles with a range of 3,500 kilometers that could strike targets as far south as Pine Gap. We could lose bases through missile strikes as quickly as through diplomatic coercion.

As ASPI’s Marcus Hellyer notes, RAAF airborne refuelers extend the time on station of platforms such as the F-35A and extend their range by about 500 kilometers. The risk is that increasingly long-range PLAAF airpower will place these airborne refuelers under threat. So, they must be defended. The logistical challenges increase as fighters need to defend the tankers and, in turn, need the tankers to stay on station.

There are two options for managing this dilemma. The first is acquiring longer-range fighters. The proposed US Air Force next-generation air dominance (NGAD) and US Navy F/A-XX programs could potentially deliver such a capability for the RAAF, but likely not until the 2030s. The second is to use the Loyal Wingman as a basis for a future multirole vehicle that can undertake both longer-range strike and long-range air defense missions as part of an integrated air and missile defense system, such as that envisaged under Project AIR 6500.

Certainly, the first-generation Loyal Wingman could be employed on one-way flights to contest PLAAF forces in the South China Sea through electronic warfare missions, for example, and offer a forward line of combat air power while leaving crewed platforms to the rear. But the performance and payload of the Loyal Wingman as it is currently configured would leave it vulnerable to higher performance crewed PLAAF fighters such as the J-20, as well as the J-11 and J-16.

Evolving the Loyal Wingman into a second-generation platform with greater range, payload and performance to expand the RAAF’s tactical and operational air defense and strike capabilities is a clear path forward. It should take full advantage of rapid digital design and development to produce an evolved aircraft not in decades, but in years, noting that the current aircraft went from concept to first flight in three years. In confronting the growing challenge posed by a much more capable PLAAF, the RAAF needs to think in terms of hemispheric airpower projection. That’s a job for Loyal Wingman 2.

Malcolm Davis is a senior analyst at ASPI. He is on Twitter at @Dr_M_Davis.