Australia Switches to the AH-64E Apache 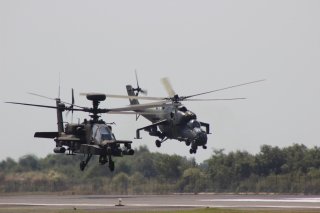 This morning, Defence Minister Linda Reynolds announced that the replacement for the much-troubled ‘Aussie Tiger’ armed reconnaissance helicopter (ARH) would be the Boeing AH-64E Apache Guardian. Australia will acquire 29 of the advanced Apaches from 2025, at a cost of A$4.5 billion, to replace 22 Tigers. The minister stated:

This new ARH capability will strengthen Australia’s armed reconnaissance force to better shape our strategic environment and deter actions against our national interest.

Defence considered a number of helicopters against key criteria of proven ability, maturity and an off-the-shelf operating system.

The Apache Guardian is the most lethal, most survivable and lowest risk option, meeting all of Defence’s capability, through-life support, security, and certification requirements.

By pursuing a proven and low-risk system offered by the Apache, Defence will avoid the ongoing cost and schedule risk typically associated with developmental platforms.

Given the challenges the Australian Army has faced in operating the Tiger ARH, Defence was clearly seeking a well-demonstrated, tested and capable platform that ticked the boxes for cost, introduction into service and sustainability.

It’s important to note that the Tiger’s problems have eased since a devastating audit report released in 2016. ASPI’s Marcus Hellyer noted in 2019 that flying hours have improved and the cost per flying hour has stabilised. With the Tiger’s airframe still enjoying flight-worthy hours, there’s no reason it couldn’t be sustained in service. Hellyer notes that ‘while it might never achieve the original requirement, in the judgement of the army’s leaders and aviation specialists it has reached a level of capability that’s deployable and useful in the current threat environment’.

However, funding is never limitless, and flight crews and platform maintenance are constrained resources. The army wouldn’t to want to fly and sustain two different platforms. So, as far as the army’s concerned, the Tiger must go. Today’s announcement confirms that Defence concurs with that sentiment, and supports the Apache acquisition.

Compared with the Tiger, the Apache is a much heavier platform and it has half the range—257 nautical miles versus 430 for the Tiger. The Apache’s suite of mission systems is fully developed, including advanced satellite communications and the Link 16 tactical data network. The Tiger has obsolescent radios, though an upgrade was in progress, and has an interim iTDL datalink developed by Elbit Systems, though not Link 16. These are major weaknesses, and the advanced digital connectivity of the Apache is a clear factor in its favour. In particular, the Apache can connect with and control armed drones through its manned–unmanned teaming (or MUM-T) system, a feature the Tiger lacks. Both helicopters have similar weapons capacity, though the Apache has more than double the rounds of 30-millimetre ammunition compared to the Tiger.

Operating cost also needs to be considered. The sustainment challenges of the Tiger drove up operating costs and shrunk flying hours—a death spiral for the capability. Airbus has suggested that operating the Tiger as it currently stands costs A$9,465 per hour; however a RUSI report estimated the cost per flying hour to be around A$27,000 and the defence annual report estimates it’s more like A$34,000 per hour. That’s in comparison to the Apache’s projected operating cost per hour at A$10,567.

Moving to the Apache also gets Australia into a very large user community—including many partners and regional countries, such as the US, Singapore, Indonesia, South Korea, Japan, Taiwan and the UK—which has benefits for interoperability, economies of scale, opportunities to learn from other users, and shared logistics.

The acquisition of the AH-64E needs to be driven by the following considerations to ensure the Australian Defence Force gets a credible capability and the mistakes made with the Tiger program are avoided.

First, ADF forces must have access to the capability when and where they need it. That means the Apache needs to be on call at all times to support the ADF, either domestically or in expeditionary deployment. It also must be affordable. The maturity of the Apache as a platform, and its ability to be sustained from a broad and established international support base, means that it is a lower risk acquisition than the Tiger was.

Second, the Apache must be seen not as a standalone or an army-only capability. It must be part of a system-of-systems networked capability for the entire ADF and must be able plug and play easily with the full range of ADF capabilities. The Apache is well placed to do that. For example, its advanced satellite communications and its Link 16 would enable it to share data with and be commanded from platforms such as the air force’s E-7A Wedgetail and the navy’s Hobart-class air warfare destroyers. The army will need to relinquish sole control of Apache to ensure it becomes an ADF capability, not just an army capability. That demands a significant cultural shift.

Third, the Apache needs to fully connect with armed autonomous systems. That means the ADF needs to get serious about a more ambitious and fast-moving autonomous systems strategy that deliver new capabilities later this decade, including for lethal autonomous weapon systems. It may imply additional capability acquisition for smaller ‘loitering munition’-type capabilities beyond the armed MQ-9B Sky Guardian unmanned aerial vehicle.

Finally, the Apache allows the ADF to begin a journey towards future capability acquisition, including the potential emerging from the US future vertical lift and future armed reconnaissance aircraft  programs. Getting the Apache should be seen as a transitionary step towards more advanced capabilities that can complement it in the 2030s, and ultimately replace it by the 2040s.

The main challenge facing the Apache may simply be survivability in the future battlespace. It was originally designed to fight in a high-intensity war between NATO and the Warsaw Pact countries in the 1980s. Since then, the lethality of ground-based integrated air defence systems, including very low altitude air defence systems, has rapidly evolved, making the use of crewed platforms in close proximity to enemy forces extremely hazardous. That trend will continue, and could soon get to the point where platforms such as even the Apache Guardian will have to operate either well to the rear—thereby defeating their rationale—or risk heavy losses. If the ADF only has 29 aircraft, we may be, once again, building a boutique but brittle capability.

Maybe it’s time to change the procurement paradigm and consider the advantages of the cheap and many autonomous systems over the expensive and few crewed platforms. That would demand a fundamental transformation in our thinking about how Australia undertakes defence capability development.