Australia is Switching Out MRH-90s for Blackhawks 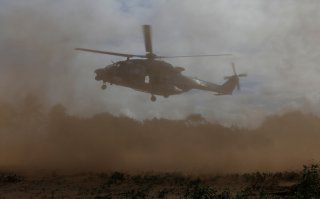 Here’s What You Need to Remember: Despite the sunk cost, trying to repurpose the MRH-90 will merely extend the drain on resources. We’ve made the decision; walk away, don’t look back.

The sad saga of the MRH-90 Taipan helicopter has been running for a long time. Back when I worked in the Department of Defense, we used to occupy ourselves from time to time calculating how much money the taxpayer would save in the long run if we just walked away from the MRH-90 utility helicopter and bought Black Hawk helicopters instead. The answer was a lot. And the sooner you did it, the more you’d save, by avoiding sinking more acquisition dollars into the MRH-90 and realizing the substantially lower operating costs of the Black Hawk. But even though those numbers were shared with Defense’s senior decision-makers, the department couldn’t bring itself to take that step.

Now, however, after almost the entire $3.7 billion acquisition budget has been spent, the government has announced what should have been done long ago: it will retire the MRH-90 fleet early and acquire a new fleet of Black Hawks. That’s a good call. While on paper the MRH-90 has more capacity than the Black Hawk, in real life that’s irrelevant if the helicopter isn’t flying.

So, what’s changed? At some level it’s about China, just as everything in defense and strategic policy today is about China, but not in the way you might expect. Neither the MRH-90 nor the Black Hawk will have a deterrent effect in the way nuclear-powered submarines or long-range strike missiles will.

The first way that it’s indirectly about China is that Defense Minister Peter Dutton is trying to impart a sense of urgency to Defense’s lethargic acquisition system to meet Australia’s deteriorating strategic environment. He has also said he’s going to hold industry to account for under-delivery. The MRH-90 project has been going since 2004 and still hasn’t delivered what it was meant to. The days when projects could noodle along because we had all the time in the world are gone.

The second way is that the new strategic climate means there’s more willingness to accept the poor optics of retiring a $3.5 billion investment early—just as the government was willing to accept what will likely be a sunk cost of more than $3 billion once all is said and done in the cancelled Attack-class program.

The third way is that Defense is suddenly rich in cash—and that’s also because of China. A key reason that the government and Defence hadn’t replaced the MRH-90 is that, even though there would have been long-term savings through the lower operating cost of the Black Hawk, there would have been a big short-term acquisition cost. A private company could manage that by borrowing and paying it back with the operating savings (or the revenue raised by operating the new asset). Defense can’t do that; each year it has to live within its means. Buying a replacement for the MRH-90 would have meant deferring or cancelling another priority. And with Defense’s acquisition program historically oversubscribed, that would have had a ripple effect of further delays on other programs.

Now Defense has the opposite problem: it’s got too much cash. That’s partly due to the government increasing the defence budget (again, largely due to China), with much of that flowing into the acquisition budget. That steep increase combined with the impact of Covid-19 on industry and supply chains meant that last year Defense underspent its acquisition budget by around $1 billion. That’s likely to occur again this year, with further increases built into the budget and the pandemic lingering.

But the cash bounty is also due to the cancellation of the Attack class in favour of nuclear-powered submarines (and that’s definitely about China). Defence was planning to spend about $1 billion this year on the Attack class. That was to grow over the next few years to $1.5 billion and potentially $2 billion a year. While SSNs will cost more overall than the Attack class, little SSN-related spending will occur in the next few years. In the public sector it’s ‘use it or lose it’. In short, Defense now has the cash to get Black Hawks.

And there’s potentially other sources of cash to put towards them. One problem with the MRH-90 was the restriction on its ability to perform the special forces role, pushing Defense to investigate a dedicated fleet of light helicopters specifically for special forces. That requirement may now be redundant if the new Black Hawks can do that job.

What does the decision to buy off-the-shelf American helicopters mean for Australian industry, particularly coming hard on the heels of the cancellation of the Attack class which left a lot of Australian companies high and dry? I don’t think it means the government is walking away from Australian defense industry, but its sense of urgency is shifting its policy. Since the Coalition was elected in 2013, the industry pendulum has swung from the ‘Abbottist’ view that the defense budget is not an industry support program and we should go to the global market for capability to an unstated policy that everything that can be done in Australia will be done in Australia.

The pendulum is swinging back a little. The Howard government’s original decision to buy the MRH-90 went against Defense’s preference for the Black Hawk and was made due to the jobs involved in local assembly. But it’s been another case that shows that assembling systems designed overseas with largely overseas components doesn’t necessarily deliver better capability or make the system any easier to sustain. The reassessment of the balance of priorities between local jobs and capability is also being driven by the new realism created by China’s behaviour. Hopefully, we’ll reach that happy middle ground where the government will support Australian defense industry when it makes sense to do so but continue to buy off the shelf overseas when there’s the need and the opportunity to acquire capability quickly.

It’s possible that the Black Hawk decision will be the first of several in which Defense puts its embarrassment of riches to use in making some rapid off-the-shelf purchases overseas. And as we all know, the real money for local industry comes through sustaining those systems for the decades they’re in service.

A final note. While it may be tempting to hang on to the MRH-90 in some kind of disaster-relief or bushfire-fighting role, that siren song must be avoided. The MRH-90 has been costing $35,000 per hour to operate. Last financial year that ballooned to $50,000 and it was probably the final straw. Even if that could be halved by stripping out military capabilities, it would still be orders of magnitude more than a civilian firefighting or emergency services helicopter. Despite the sunk cost, trying to repurpose the MRH-90 will merely extend the drain on resources. We’ve made the decision; walk away, don’t look back.

This article was first published by the Australian Strategic Policy Institute. It is being reprinted due to reader interest.