For Australia, What Comes After the F-35? 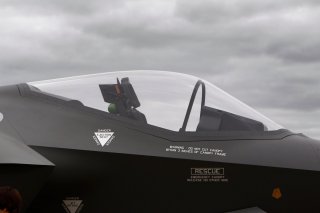 Australia’s 2020 defence strategic update and accompanying force structure plan outline the next 20 years of development for the Royal Australian Air Force’s strike and air combat capability. Some notional funding streams are provided in the force structure plan that define the priorities for capability development and raise some intriguing questions for future planners to consider.

At the centre of the plans for the RAAF, of course, are the F-35A fighter jets, which are due to achieve final operational capability by the end of 2023. The force structure plan also allocates funds for ‘additional air combat capability’ between 2025 and 2030. It doesn’t specify what that additional capability will be, though it says that the government ‘is committed to … support of the F/A-18F Super Hornet strike aircraft, and acquiring enhanced air launched munitions’.

The Super Hornet remains an important capability, given that it will be the initial primary launch platform for the AGM-158C long-range anti-ship missile, or LRASM.

The F/A-18F fleet could be upgraded to ‘Block III’ standard, allowing the jets to remain in service into the mid-2030s. That makes sense from a risk-management perspective, because the government wouldn’t be betting everything on the long-term effectiveness of the F-35’s stealth. China’s continued development of quantum sensors and use of artificial intelligence could erode that advantage in coming years.

the Super Hornet fleet has been extended beyond its initial bridging capability timeline and is now planned to be replaced around 2030. Its replacement could include either a fourth operational squadron of Joint Strike Fighters or possibly a yet to be developed unmanned combat aerial vehicle. The decision on the replacement of this air combat capability will be best undertaken post-2020 when technology and emerging threat trends are better understood.

The 2020 plan doesn’t mention a fourth F-35 squadron, but elevates support for what it calls ‘teaming air vehicles’. It anticipates their acquisition between 2025 and 2040, which would fit in with decisions being made on the future of the F/A-18F versus an additional squadron of F-35s.

Boeing’s loyal wingman drone for its ‘airpower teaming system’, being developed in Australia, could emerge as a good solution to the RAAF’s long-range-strike requirements by the end of this decade. It could be evolved into a more capable platform, with greater range, payload and speed, from its current prototype design. It wouldn’t be the equivalent of acquiring the B-21 Raider stealth bomber, but an evolved loyal wingman would represent something closer to a true long-range-strike platform than simply purchasing another squadron of F-35s, without all the political, financial and strategic challenges associated with the B-21.

Alongside achieving final operational capability for the F-35 and teaming vehicles, the force structure plan seems to focus on long-range missiles as the centrepiece of a ‘strike’ option for the RAAF. But thinking needs to go further than simply bolting long-range munitions onto F-35s and F/A-18Fs, and a future strike capability will need to extend beyond the RAAF.

For example, any new capabilities will need to rely heavily on the Defence Intelligence Group, established on 1 July to ensure that platforms have access to the latest intelligence to maximise their combat effectiveness. That could bring in a host of non-airpower capabilities, ranging from unmanned surface vessels equipped for maritime surveillance such as the Ocius Bluebottle, through to surveillance satellites in low-earth orbit that are to be acquired through Defence Project 799, Phase 2.

The 2020 plan also suggests that the RAAF must consider a replacement for the E/A-18G Growler electronic attack aircraft between the late 2020s and 2040. Keeping the Growlers operating alongside the Super Hornets makes good sense. But if the Super Hornets are retired by the mid-2030s, that would be an ideal time to explore new approaches to electronic warfare and attack. Once again, the sensible solution would be to take full advantage of unmanned systems wherever possible. One option might be for Australia to team up with the United States to develop a stealthy and highly survivable variant of the loyal wingman, with the US supplying the complex and classified electronic warfare payload on board.

Looking further into the future, the plan mentions the period between 2035 and 2040 as the beginning of a process for considering a replacement for the F-35. In fact, something would be amiss if the RAAF weren’t discussing the F-35 replacement right now and thinking about how Australia could work with the US, the UK and other allies on fielding new types of air combat platforms much sooner. For example, the US is no longer speaking about ‘sixth-generation’ fighters, and recognises the risks of slow, decades-long acquisition cycles for a future fighter. The focus of its next-generation air dominance program is now on a ‘digital century series’ approach of rapid development of small numbers of several types of airframes over short periods, as few as five years.

It would be a mistake for the RAAF to embark on another 20-year acquisition project to eventually replace the F-35 from the late 2040s, yet that’s exactly what the force structure plan implies. Waiting until 2035 to begin developing a replacement ignores the clear trends that suggest a desire for faster capability acquisition.

The F-35 has taken two decades to develop, at great expense, and the approach of a common airframe for multiple tasks means it can’t be optimised for a single role. Going back to platforms optimised for a specific role—air dominance, long-range strike and electronic attack, or intelligence, surveillance and reconnaissance—that can be acquired faster might be a better path.

The RAAF shouldn’t wait until 2035 to get started on developing these types of capabilities. Its plans to complement, and then replace, the F-35 can be accelerated, and it would make sense to promote collaboration with the US and the UK in this endeavour to boost the RAAF’s air combat capability sooner.