The Australian Navy Is Fully Committed to Going Nuclear 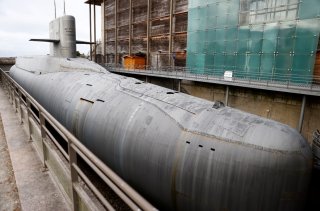 Here's What You Need to Remember: It’s becoming even more essential that Defence matches the speed of change in the strategic environment in areas that can deliver well before then. That will require very different approaches to defence development and acquisition than we see now, with current and historical lessons.

The world’s gotten more dangerous—and quickly. And while nuclear submarines from the new AUKUS partnership will give Australia a powerful long-term deterrent, this won’t be a fast program that delivers inside 15 years.

It’s becoming even more essential that Defence matches the speed of change in the strategic environment in areas that can deliver well before then. That will require very different approaches to defence development and acquisition than we see now, with current and historical lessons.

Rapid change is happening, as in the collapse in Afghanistan and the emergence of the AUKUS partnership that ended a 40-year, $90 billion contract with the French.

The growing defence budget provides the opportunity to strengthen our military’s ability to defend Australia, but the defence organisation’s timelines are agonisingly slow.

Even before the subs announcement, most of the investment was going into massive, multibillion-dollar manned systems like ships, submarines and armoured vehicles that are only available in small numbers and that won’t arrive during this dangerous decade.

Why is this? A defining attribute of the development of the defence organisation since the era of Arthur Tange in the 1970s has been to weld the military services and the public servants in the Defence Department into a single, integrated organisation. This has been sensible for coordinated functioning and for stripping out duplicated activities, but it’s also led to an increasingly complicated, dense bureaucratic organisation which is really a federation, not a unified whole.

Along with the creation of a dense bureaucratic system, the business processes around spending the billions Defence gets for weapons, platforms and surveillance and intelligence systems have been elaborated and detailed over time. A primary objective has been to reduce the risk of project trouble—delays and cost blowouts. However, these structures almost inevitably deliver the opposite result—additional costs, extended delivery timelines and less capability.

The latest version of the Capability life cycle manual and the dense processes in Defence’s Capability Acquisition and Sustainment Group project management all make getting anything that looks like fast moving technology into the hands of our military, in any numbers, plain unlikely.

Defence has designed itself to move slowly and carefully—which was fine when Australia had the luxury of time, with major conflict a distant prospect.

Defence’s structures and business processes are deeply embedded not just in the organisation, but in the mindsets and assumptions of pretty much everyone who works there. And the other powerful departments of state—Finance, Treasury and the prime minister’s department—that are part of ‘whole of government’ decision-making, like these constraints on how Defence spends money.

Any expectation that internal adjustments to these hardwired design features will fix this are misplaced. Defence won’t solve the problem of timeliness internally—a blue whale cannot become a roadrunner. Recent evidence out of Defence supports this conclusion: to speed itself up it released an 88-page transformation strategy, filled with commitments to implement things 2016’s First principles review had already said should happen.

It’s absolutely right to take the time, care and methodical approach of our UK and US partners to design, manufacture, crew and support these weapon systems. They will demand this.

Unfortunately, the AUKUS announcement’s overwhelming focus on nuclear submarines can reinforce this same organisational behaviour in the senior leadership of Defence and across its workforce in areas well outside the subs program.

Slow and complex is Defence’s ‘happy place’. But this could suck the oxygen out of other areas where an entirely different, rapid and risk-accepting mindset is needed.

What can be done? Focused change is likely to succeed more than trying to reinvent the Defence organisation.

And an irony provides a bigger opportunity. Military officers participate in all the behaviours and processes that make Defence frustrating and slow. When they’re in their organisational roles, they are among the most adept at using arcane processes to avoid change and instead invest in things they know well—mostly more elaborate, expensive versions of what they already have. But they’re the ‘go-to’ people when our political leaders must act in crises and need focus and results fast. There they have strong records of success.

The lesson is not just that organised, methodical military people can do things outside of Defence. The key is that the appointments were made in ways that enabled success.

Frewen’s letter of appointment is just two pages long. It empowers him to get cooperation from any Commonwealth official, regardless of their line responsibilities, and to work directly for the prime minister and health minister. He can engage with state and territory governments and with companies as he judges necessary. The focus of the work is crystal clear: ‘to ensure public confidence in the vaccine rollout and ensure as many Australians are vaccinated as early as possible within [Therapeutic Goods Administration] guidelines and available vaccine supply’.

Campbell’s direction was even simpler. It was the Abbott 2013 election slogan: ‘Stop the boats’, and he was similarly empowered to work across organisational boundaries.

This approach can increase Australia’s military power quickly. A ‘sovereign missile production coordinator’ could be appointed outside the reporting line of Defence or any other agency and empowered to use the $1 billion allocated to create, urgently, this domestic production capability. That could deliver an Australian ability to build at least some of the $100 billion in missiles Defence plans to buy over coming years, starting well before 2030.

Relying on Defence’s complex internal evaluation, procurement and contracting processes and examining myriad industry bids and options in response to requests for information and then perhaps requests for tender will probably not deliver this outcome.

An Australian version of the US’s highly successful Defense Advanced Research Projects Agency, better known as DARPA, could be created here with a similar empowered and resourced mandate to deliver powerful new technologies well before 2030. Those appointed to lead it could come from the military, the public service or the corporate world.

Despite AUKUS, not all fast-tracked capabilities will come out of the US and UK partnerships. Israel and Norway are likely to move faster to help us establish domestic missile production. Australian firms like NIOA, EOS, Droneshield, Defendex and Gilmour Space can deliver fast-tracked systems too. If we take sovereignty, self-reliance and timeliness seriously, this matters.

So, the government must push defence development and procurement to operate at two speeds—the ‘slow food’ approach for the subs and the ‘fast food’ approach to deliver meaningful capabilities to the ADF over the next two, three, five and 10 years.

Achieving this almost certainly means Defence must let go of control to others—like an Aussie DARPA or an Australian missile tsar—for fast-moving programs.

Before people say this would be crazy, unprecedented risk-taking, focus and empowerment outside existing government structures is strikingly similar to the way key Australians like Essington Lewis and Lawrence Wackett transformed Australia’s economy in the late 1930s and 1940s. It’s also how the seminal 1987 defence white paper was created.

There are lessons here for every department and agency, and for anyone wrestling with inter-departmental or cross-cutting issues.

Even as we begin the incredibly important long-term program of producing the powerful deterrent capability of nuclear submarines, we also need to get up to the speed of change in our environment.

For those who think working outside the standard machinery of government is only justifiable in a time of crisis, the government has clearly stated that we are in the most dangerous era since World War II, and we cannot rely on warning time to prepare for conflict. The crisis is here.

This article first appeared at the Australian Strategic Policy Institute. It is being reprinted here due to reader interest.