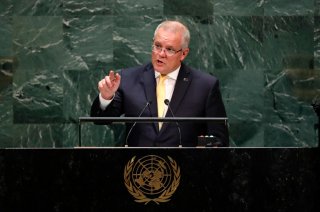 The Morrison government will introduce legislation to enable it to review and cancel agreements state, territory and local governments and public universities have entered with foreign governments.

The legislation, if passed, can be expected to lead to the Victorian government’s “belt and road” agreement with China being quashed, and will put up in the air many university arrangements.

Scott Morrison has been highly critical of the Victorian deal, saying Belt and Road is not a program the federal government has signed up to and states should not be acting in ways inconsistent with Australian government policy.

The dramatic move reflects increasing concern about Chinese influence and interference, although the legislation would apply to agreements with any foreign government.

Under the legislation, the foreign minister will be given the power to stop proposed arrangements and cancel existing ones with foreign governments when they were considered against Australia’s national interest.

There will also be a public register to make agreements transparent.

Current arrangements are prolific. They include agreements for co-operation on cultural matters, education, health, the public sector, science, tourism, environmental management, and trade and economics. There are also sister city and state relationships.

The move will further deepen the tension between Australia and China. It comes as the deputy head of mission at China’s embassy in Australia, Wang Xining, accused Australia of hurting the feelings of the Chinese people in pressing for an inquiry into the origin of the coronavirus.

“All of a sudden, they heard this shocking news of a proposal coming from Australia, which is supposed to be a good friend of China,” he told the National Press Club on Wednesday.

“We believe this proposal was targeted against China alone, because during that time Australian ministers claimed that the virus originated from Wuhan, from China, and they did not pinpoint any other places as a possible source,” he said. “We don’t think it was fair.”

Morrison and Foreign Minister Marise Payne said in a statement: “The Commonwealth government has exclusive responsibility for conducting Australia’s foreign affairs. However, state and territory governments and their entities currently also enter into arrangements with foreign governments in a range of areas – from trade and economic cooperation to cultural collaboration and university research partnerships – without having to inform the Commonwealth.

"This legislation will support state and territory governments to ensure they are acting in a way that serves Australia’s national interests, is consistent with our values and aligned with our foreign policy objectives.”

The legislation will be introduced next week and the government wants it passed this year.

Morrison said he had recently arranged for all premiers and chief ministers to receive a comprehensive briefing on national security.

“It is vital that when it comes to Australia’s dealings with the rest of the world we speak with one voice and work to one plan,” he said.

“Australians rightly expect the federal government they elect to set foreign policy. These changes and new laws will ensure that every arrangement done by any Australian government at any level now lines up with how we are working to protect and promote Australia’s national interest.

"While many agreements and partnerships are of a routine nature, it is important that the federal government is notified of all and any agreements, be they state and local governments, or our universities.

"Where any of these agreements undermine how the federal government is protecting and promoting our national interests they can [be] cancelled.”

It will not apply to commercial corporations and state-owned enterprises. Nor will it apply to foreign universities, unless they are arms of a foreign government, such as government military universities.

The test the foreign minister will apply will ask:

Within six months of the legislation coming into force states, territories, councils and universities will have to notify the government of their arrangements with foreign governments.

The foreign affairs department will review existing and proposed arrangements, and advise the minister of their implications for foreign policy and foreign relations.

If the arrangement fails the national interest test, the foreign minister will be able to stop the entity from negotiating, entering, remaining in, or giving effect to the agreement.

The minister will be able to terminate private contracts related to the main arrangement – for example an infrastructure construction contact resulting from the Victorian Belt and Road agreement.

If necessary the government could obtain an injunction in the Federal Court or High Court to enforce the foreign minister’s decision.

Payne said: “It is vital for Australia’s prosperity, security and sovereignty that our foreign policy is driven by our national interest.

"There is currently no legislative requirement, nor clear understanding, that states and territories consult properly with the Commonwealth on arrangements with foreign governments.

"These changes will provide governments, institutions and the Australian people with confidence that due diligence is given to international arrangements to ensure they are consistent with our national interest and our values.”