The B-21 Bomber Could Replace Fighter Aircraft 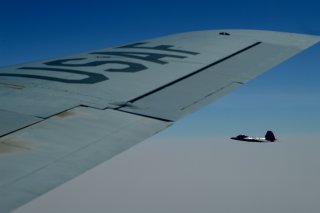 Here's What You Need To Remember: The extremely high cost of developing a new Next-Generation Air-Dominance fighter -- potentially hundreds of billions of dollars -- is another factor in the Air Force’s decision to consider alternatives to traditional fighter aircraft.

The U.S. Air Force’s new B-21 stealth bomber could have air-to-air capabilities. If so, the new bomber could function as a partial replacement for the Air Force’s current force of air-superiority fighters as the Pentagon revises its strategy for controlling the air over future battlefields.

“If we were to characterize it as a fighter, we would be … thinking too narrowly about what kind of airplane we need in a highly contested environment,” Pleus told Air Force. “A B-21 that also has air-to-air capabilities” and the ability “to work with the family of systems to defend itself, utilizing stealth—maybe that’s where the sixth-generation airplane comes from.”

The Air Force for decades has declined to equip its lumbering heavy bombers with significant air-to-air armament, instead of counting on nimble fighter aircraft to protect the bombers. But China’s and Russia’s improving air-superiority systems have compelled the Air Force to plan differently.

“China has developed (and deployed) one fifth-generation fighter, the J-20, and is far along in developing a second, the J-31,” Air Force noted. “Russia is producing the Su-57. At the same time, China has replaced obsolete second- and third-generation aircraft with new fourth-generation fighters, and Russia has developed—and is exporting—advanced air-defense systems such as the S-300 and S-400 series and is testing the more advanced S-500, with a new S-600 also under development.”

It’s getting harder for America’s current fighters -- non-stealthy F-15s, F-16s and F/A-18s and stealthy F-22s and F-35s -- alone to defeat enemy fighters and other air-defenses in order to protect the bombers. Armed drones might have to help. And the bombers also might need to be able to protect themselves.

The extremely high cost of developing a new Next-Generation Air-Dominance fighter -- potentially hundreds of billions of dollars -- is another factor in the Air Force’s decision to consider alternatives to traditional fighter aircraft.

“In April 2018, senior Air Force leaders told Congress they had recognized there was ‘no silver-bullet solution’ when it came to developing a new air-combat platform,” The War Zone reporters Joseph Trevithick and Tyler Rogoway explained. “As [the] NGAD [effort] has evolved, it has steadily shifted more and more toward unmanned and pilot-optional concepts linked together by powerful networks so that they can operate at least semi-autonomously, if not autonomously, as necessary.”

Not coincidentally, the Air Force’s Skyborg program is scrambling to develop the software and hardware for operating inexpensive, missile-armed drones as so-called “loyal wingmen” for manned fighters. With a few tweaks, bombers also could control their own armed wingman drones.

Swarms of drones “could do things on behalf of a manned fighter, to either go into areas that pose too high a threat or to provide more dilemmas for the adversary,” Pleus told Air Force.

“These unmanned systems would be ‘attritable’ aircraft, meaning combat losses would be acceptable, or at least less costly to lose than manned platforms,” Air Force noted.

As a result of competition and cost pressure, the Air Force’s future air-superiority force in the near future could include a dwindling number of fourth-generation fighters plus upgraded models of fifth-generation F-22s and F-35s and air-to-air-capable B-21s, all controlling expendable wingman drones.

What is unlikely is a single new fighter directly replacing all those F-15s, F-16s and F-22s and handling air-superiority missions all by itself. The Air Force’s new air-to-air system "is not going to be a 2040 version of the F-22, an aircraft that can close almost any kill chain the Air Force has today all by itself," aviation expert and journalist Steve Trimble told Trevithick and Rogoway.

David Axe serves as Defense Editor of the National Interest. He is the author of the graphic novels  War Fix, War Is Boring and Machete Squad. This article first appeared in September 2019 and is being republished due to reader interest.