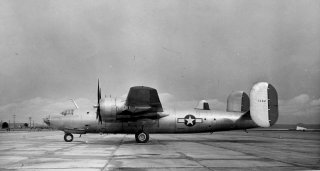 This resulted in the Dominator being considered a low or medium-altitude bomber, when compared to the B-29.