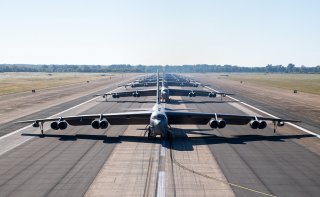 Here's What You Need to Remember: On their first pass, the Soviet crew were on deck waving, at first assuming the aircraft were their Bear bombers. On the second pass, not one member of the Soviet navy was to be seen.

160 feet from tip to tail. 185 feet across. 240 tons of metal, fuel, bombs, and human flesh traveling at 650 miles per hour. You wouldn’t think something so big, moving so fast, would also be capable of skimming the ocean surface at an altitude of just 80 or 90 feet, lower than the deck of an aircraft carrier.

David Axe served as Defense Editor of the National Interest. He is the author of the graphic novels  War Fix, War Is Boring, and Machete Squad.