Back From the Dead: The Navy Brought These Battleships Back From Retirement 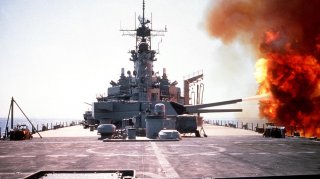 Here's What You Need To Remember: The Navy has had confront new threats immediately after downsizing several times in the past.

Image: The battleship USS WISCONSIN (BB-64) fires a round from one of the Mark 7 16-inch/50-caliber guns in its No. 3 turret during Operation Desert Storm. 6 February 1991. U.S. Navy/John Carnes.