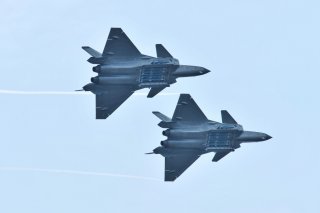 Chinese thinking appears to closely mirror longstanding approaches used by U.S. developers to build and improve 5th-Generation aircraft such as the F-22 and F-35. Beyond that, emerging concepts for a Chinese 6th-generation stealth fighter correspond very closely to U.S. approaches now underway for years.

The term used by Chinese weapons developers to characterize the extent to which “information,” “sensors,” and AI-enabled “decision making” is itself an adaptation of a famous U.S.-developed air warfare principle called the OODA-loop.

Made famous by former U.S. Air Force fighter pilot Col. John Boyd, the OODA loop process stands for Observation, Orientation, Decision Action, a decision-making process, cycle or loop intended to ensure air combat superiority. If a pilot can complete the loop, or the decisionmaking process, ahead of or inside of an enemy, victory in an aerial dogfight is much more likely.

Sure enough, a report in the Chinese Global Times newspaper about the growing use of AI-in simulated training, dogfighting procedures and pilot decision making quotes the designer of the Chinese 5th-Generation J-20 referring to the essence of an “OODA 3.o.”

The Chinese paper says the “OODA 3.0” term was coined by Yang Wei of China's Aviation Industry Corporation. The description of Yang’s thinking, which states how “intelligence is becoming the deciding factor,” is nearly identical to the rationale upon which the F-35 was developed.

F-35 long-range sensors and AI-enabled sensor fusion data organization and information processing have been in development in the U.S. for more than a decade and have, not surprisingly, informed development for the U.S. Air Force’s now airborne 6th-generation fighter.

By extension, Chinese papers report that 6th-generation fighter jet developers are having success using AI in dogfighting simulations assessing the speed of decision making. They cite how Chinese scientists engineered an AI-based aerial combat decision-making simulator. The Chinese AI-capable simulator was able to defeat human pilots in some circumstances, a phenomenon discovered by U.S. developers years ago.

Chinese efforts to copy, replicate or even steal U.S. technologies, design concepts and modernization strategies are well known, less well known is the relative sophistication of China’s AI piloting technology. Can it truly rival U.S. progress in the area? The U.S. Air Force has, for instance, already successfully flown human pilots with AI-co-pilots to optimize combat performance. The U.S. already has a 6th-Generation stealth fighter jet flying. However, few are likely to underestimate China’s well-known ability to mirror and quickly copy U.S. designs and developmental strategies.