Bad News: Ebola Might Be a Chronic Infection. Here’s Why We Shouldn’t Panic. 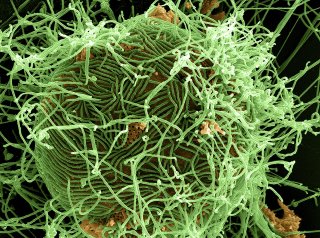 Ebola is back in Guinea in West Africa, five years after the largest Ebola epidemic ever known ended – but it has not come back the way we expected it to.

Eighteen people are reported to have been infected, of which nine have died. Although vaccines against Ebola exist and have been rolled out, there is the fear that these small clusters of infection could ignite into something much, much larger.

What’s unusual about the virus that has caused this new outbreak is that it doesn’t seem to have come from an animal but from a human. The individual was probably infected during the 2014-16 epidemic.

While Ebola is thought to be a short-term infection, this latest outbreak highlights the grave potential of longer-term infections. But do we have to now reassess everything we thought we knew about these classic acute, “self-limiting” viral infections?

Many viral infections are acute (sudden onset) and self-limiting – that is, they resolve on their own. Think of things like the cold, flu or measles: you’ll get infected, feel lousy for a couple of days or so and then it will clear up and you’ll go back to your life. What’s happening inside your body is a different story, though. In the few days following exposure, the virus gets inside your cells and replicates millions of times, which spreads the infection further through your body and can be released to transmit to another person.

This burst of infection triggers an immune response that seeks to limit onward spread. Sometimes the virus itself kills infected cells. Eventually, potent antiviral defences are produced composed of B cells and antibodies, as well as T cells. Antibodies and T cells mop up the residual infection and expunge your body of infected cells. After a few weeks, there’s no trace of the original infection, and in its place you’ll have some immunity to the infection in the near future.

These long-term infections are known as persistent or chronic infections. Herpes viruses can cause a special kind of persistent infection known as a latent infection, where it lingers in the body for years or decades, without replicating. For a virus to survive in the face of an immune response, it must have strategies to mitigate our defences either through direct antagonism or by mutation and evasion. Also, persistent infections occur in so-called immune-privileged organs such as the brain, the eyes and the testicles. These organs can tolerate an infection without eliciting an inflammatory immune response.

So what then is Ebola? Ebola viruses, of which there are six species, are probably bat viruses that cause what is known as Ebola virus disease (EVD) in humans and other animals. EVD comes on swiftly, causing a fever, flu-like symptoms, diarrhoea and haemorrhage, which can lead to organ failure and death. This systemic infection is characterised by a very high level of virus in the blood, organs, and bodily fluids.

Survivors of EVD can suffer debilitating long-term effects. Following the 2014 epidemic in West Africa, several discoveries were made regarding the long-term infections caused by the Ebola virus in recovered people in the eyes and male genital tract. In some circumstances, months later, recovered patients could even succumb to a second episode of disease caused by the virus. What’s unique about the recent resurgence in Guinea is that the length of time is greater than we had previously identified, and that, worryingly, has led to more than one infection.

How might Ebola viruses establish this long-term persistent infection? Given that they cause a large systemic infection, they probably gain easy access to immune-privileged tissues, such as the eyes or testes. In some rare cases, infection of long-lived cells in these organs combined with low levels of viral replication would be consistent with the resurgence in Guinea.

The blurring of the line between acute and persistent infections has been happening for decades. Classically acute infections have been found to establish a persistent state in some circumstances. For example, a study from 1978 found that healthy young people working at the Amundsen-Scott South Pole Station, Antarctica, were infected with parainfluenza viruses for up to six months, despite being in total isolation. Parainfluenza viruses usually cause short-lived common cold symptoms. Measles, which typically runs its course in two weeks, can lay dormant in the brain for years before reappearing and causing a brain disorder called sub-acute sclerosing panencephalitis.

Given that we now know that some infections can resist clearance from the body, cause disease at a later date and ignite another outbreak, should we be concerned? The truth is, most acute infections are just that: acute infections. This will be especially important to bear in mind with Ebola, which has the potential for increasing the stigma faced by survivors of this terrible disease.

We can try to get rid of the persistent infection through targeted vaccination or treating survivors – trials are already underway for persistent infection treatments. We might even be able to exploit this biological phenomenon to make better vaccines that continuously dose the immune system throughout the inoculated person’s lifetime.

Connor Bamford is a Research Fellow at the Virology Department at Queen's University Belfast.