Bad News for NATO: Poland Lost to Russia in a Massive Wargame 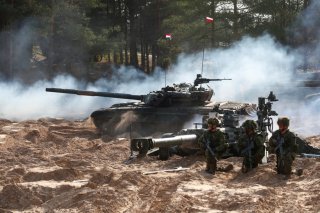 Here's What You Need to Remember: In addition to Russia’s military buildup on its own territory, it has worked with neighboring Belarus to enhance its capability of denying access to NATO aircraft both over its territory and in Poland with S-400 batteries.

Polish forces suffered a crushing defeat in a wargame called “Winter-20.” It sought answers to what could happen were Russia to throw all of the military might it has in its Western Military District against Poland.

Poland’s Ministry of Defense sought to see how its forces, including the yet-to-be-delivered F-35, Patriot air-defense system, and M142 HIMARS mobile rocket artillery systems, would fare in the event of an all-out Russian invasion with this exercise. Several thousand Polish military officers participated; the scale was unprecedented in the history of post-Cold War Poland.

The wargame serves as a reminder that NATO’s Eastern flank is weak and vulnerable to Russian aggression.

Russia has reinforced and modernized its Western Military District in recent years. A 2020 report to Congress noted that Russia’s Western Military District contains some of its most competent units. They include modern T-90 tanks, T-72B3M tanks, BTR-82 armored personnel carriers, BMP-3 infantry fighting vehicles along with sophisticated anti-air defenses, such as the Tanguska, Pantsir S, and S-400. They would presently easily overwhelm Polish and Baltic NATO units unless the United States and other allies beef up their troop commitments.

In addition to Russia’s military buildup on its own territory, it has worked with neighboring Belarus to enhance its capability of denying access to NATO aircraft both over its territory and in Poland with S-400 batteries.

Russian troops have held numerous military exercises in nearby Russian territory and in neighboring Belarus, such as the massive “Slavic Brotherhood” exercise in September. Russia and Belarus are joined in the Russian-led Collective Security Treaty Organization (CSTO), comprised of several former Soviet republics.

“Over and above the creeping normalization of Russian military activity in Belarus, which may morph into a semi-permanent presence, the clear message Russia is sending to NATO is that it can completely change the strategic position by delivering and inserting forces to those border regions with Belarus in a matter of hours,” Chatham House Russian defense expert Keir Giles told Radio Free Europe/Radio Liberty in October.

Poland’s plains have made it susceptible to invasion throughout history, from the Mongols in the thirteenth century to the Nazi and Soviet invasion and partition of Poland in 1939.

By the fifth day of the mock conflict, Russian troops had reached the Polish defensive line along the Vistula River, while fighting to take Warsaw.

Poland’s navy and air force faced complete obliteration and ceased to exist. Front-line Polish army units faced the loss of between 60 and 80 percent of their equipment. Russia obtained complete victory within five days.

In a wartime scenario, Russian and Belarusian forces could invade NATO territory along this border area and cut the alliance in two by severing logistical lines connecting Poland with Lithuania. Russia’s vow to use battlefield nuclear weapons to defend territory it conquers and controls is a clarion call to the alliance to have boots on the ground now.

A paper prepared by the Polish Defense Ministry in 2018 said having a permanent U.S. armored presence in Poland would “significantly reduce security vulnerabilities in the region, particularly in the Suwalki Gap [along the Polish-Lithuanian border].”

President Joe Biden has made reaffirming American NATO commitments a top priority, and permanently reinforcing the alliance’s eastern flank would send a strong message to Vladimir Putin. It will remind him that NATO’s resolve to resist any aggression akin to Russia’s invasions of Georgia in 2008 or Ukraine in 2014 remains unshaken. It also would bolster the confidence of our Polish allies that they will be protected in the event of Russian aggression.

Former President Donald Trump pledged to redeploy some of the 35,000 troops currently stationed in Germany to Poland last June. Polish President Andrzej Duda inked a deal in November to move 1,000 permanent troops to Poland. Biden should follow through with Trump’s pledge and go even further by considering deploying an armored division to Poland, just as the Polish defense ministry suggested in 2018.

NATO currently has the headquarters for its North-East Division based in Poland, which includes Croatian, Romanian, British, and American contingents.

President Biden and other NATO must assist Poland with replacing its aged Soviet-era military equipment with modern alliance-compatible hardware. NATO allies must rebuild the logistical supply lines that existed in Western Europe until the end of the Cold War. A military Schengen agreement is needed to allow for rapid deployment of reinforcements.

Poland will spend $49.8 billion under its 2026 Technical Modernization Plan. Among other things, it has resulted in the creation of a Territorial Defense Force, akin to the U.S. National Guard. It plans to spend 2.5 percent of its GDP on defense by 2032, making it among the highest in NATO. The foremost goal of the Polish Defense Ministry is being able to effectively conduct collective defense operations with NATO and not struggle for superiority over potential Russian invaders.

Above all, a serious conversation is needed about how best to secure Polish security from future Russian aggression. To secure peace is to prepare for war.