Bad News: The U.S. Navy Has a Warship Shortage (And China Knows It) 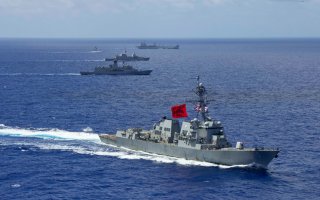 Key Point: China wants the world to know that it is growing.

Fang Xiaozhi, a researcher at the BRI Institute of Strategy and International Security, at Fudan University in Shanghai, said last year that the U.S. Navy has too few ships to meet its worldwide commitments. And more important, it doesn’t have enough vessels to defeat China in the Western Pacific.