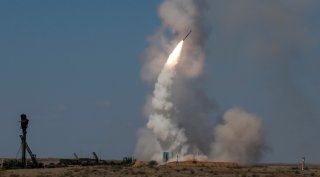 Here's What You Need to Remember: It’s an issue that still haunts the current U.S. Ballistic Missile Defense System, which is aimed at stopping a handful of primitive North Korean ICBMs, but wouldn’t have a chance against a massed salvo of hundreds of Russian ICBMs. While impressive to watch, Russia’s PRS-1M would still face the same problem of hitting a massive barrage of American warheads descending through the atmosphere at Mach 20.