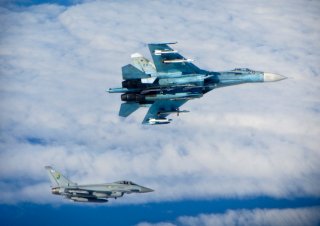 Here's What You Need to Remember: Nor are the Russians the only ones to pull risky aerial stunts. The same month that Moscow’s jets chased the U.S. spy plane into Sweden, a Chinese Flanker did a barrel roll over a U.S. Navy P-8 surveillance plane 135 miles east of Hainan Island, the site of a major Chinese naval facility.

The Russian plane “performed erratic and aggressive maneuvers” as close as 50 to the lumbering, four-engine RC-135, Danny Hernandez, a spokesman for U.S. European Command, told CNN.

The aggressive display by the Russian jet — reminiscent of the opening scene of the 1986 action movie Top Gun, in which Tom Cruise plays a U.S. Navy fighter pilot who flies inverted over a Russian plane — came just three days after a pair of Russian Su-24 bombers buzzed the destroyer USS Donald Cook while the American vessel was sailing in the Baltic.

The Pentagon routinely flies RC-135s in international air space near Kaliningrad in order to gather intelligence on Russian military movements in the region. Kaliningrad lies between between Lithuania and Poland — both NATO members — and is geographically separate from the rest of Russia. If Moscow were to attack the Baltic states, Kaliningrad would be the likely jumping-off point.

In April 2015, an Su-27 nearly collided with an RC-135 snooping near Kaliningrad. And in August 2014, Russian fighters — presumably Su-27s — acted so aggressively around one RC-135 that the American crew actually fled … accidentally crossed into Swedish air space.

Thirteen years earlier, Chinese jet fighters buzzed a U.S. Navy EP-3 spy plane near Hainan. A J-8 fighter accidentally struck the American aircraft. The J-8 pilot died; the American crew had no choice but to land their damaged plane at a Chinese airfield. Beijing released the crew after 11 days — and the spy plane after four months.

But then, the Americans have also been known to fly very close to enemy planes in order to intimidate them — and not just in the movies. In March 2013, an Iranian air force F-4 fighter attempted to intercept a U.S. Air Force MQ-1 Predator drone flying in international airspace near Iran.