The Battleship Era Sank Along With HMS Prince of Wales 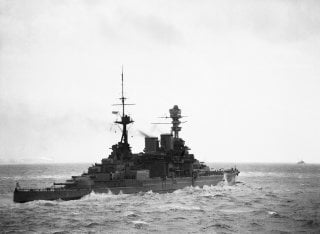 Here's What You Need to Remember: Military technological revolutions rarely happen all at one time; they generally result from the evolution of several unrelated trends that “suddenly” result in new military realities.

Seventy five years ago, the Western Allies suffered a catastrophic defeat in the Pacific. Japanese aircraft devastated an allied naval force, sinking the most effective battleships in the fleet. Japan’s aerial victory opened much of Asia up to invasion, giving the Imperial Japanese Navy a clear field for undertaking its grand offensive. The attack demonstrated conclusively that the battleship, the primary capital ship of fleets since the late 19th century, could no longer project independent of air support.

This defeat came not at Pearl Harbor, where an armada of Japanese carrier aircraft devastated a U.S. battleship flotilla at anchor, but rather off Malaya, where land-based aircraft of the Imperial Japanese Navy (IJN) sank HMS Prince of Wales and HMS Repulse, a pair of fast battleships that formed the core of Force Z. The loss of these ships shocked the British government, and helped change procurement and employment strategies in both the United States and the United Kingdom.

In the fall of 1941, the British government decided that the threat of war with Japan required a reinforced Eastern Fleet. The Royal Navy (RN) deployed three capital ships to the region; HMS Prince of Wales, HMS Repulse, and HMS Indomitable. HMS Prince of Wales, a modern battleship, had struck a mortal blow against the German Bismarck at the Battle of Denmark Straits. The battlecruiser HMS Repulse was an unreconstructed veteran of World War I, but possessed sufficient speed to keep up with Prince of Wales. Indomitable, an Illustrious class aircraft carrier, suffered damage while working up in the Caribbean, and did not arrive with the other ships.

When word of the attack on Pearl Harbor and the general Japanese offensive reached Malaya, Admiral Thomas Philips decided to sortie his ships (including the two battleships and four destroyers) north in an effort to disrupt the Japanese invasion of Malaya. The Royal Air Force had little to offer in terms of fighter cover, and Philips did not make much of an effort to coordinate.

The Japanese had noted the arrival of the two battleships even before hostilities began. In response, the IJN deployed two of its own battleships to the Malaya theater, and increased the number of available fighters and bombers. Philips cancelled the sortie on the evening of December 9th, and the British force almost collided with a Japanese cruiser force in the night.

The Japanese sighted the two battleships on the morning of the 10th, and attacked in waves. Both Repulse and Prince of Wales suffered multiple torpedo and bomb hits, and both sank shortly after noon. Japanese losses were minimal, and the Japanese invasion of Malaya was not substantially delayed.

The Royal Navy understood that aircraft could prove a lethal threat to battleships. The British carrier attack on the Italian naval base at Taranto sank or damaged several battleships. Carrier aircraft had similarly wounded Bismarck in May 1941, leaving her helpless against an RN battle squadron. But these situations had involved either stationary targets, or combined operations that included both aerial and surface assets. It was not wholly unreasonable to believe that modern battleships under power could resist aircraft, at least in some circumstances.

Much of the British appreciation for the effectiveness of airpower against warships came from the experience of fighting the Luftwaffe’s Fliegerkorps 10 in the Battle of Crete. German airpower had a devastating effect on the Royal Navy forces, sinking several cruisers and destroyers. Other attacks in the Mediterranean, launched by both German and Italian aircraft, had proven similarly effective. However, the air attacks had not, to that point, successfully destroyed any battleships.  Several battleships sustained damage from German bombing attack, but none were in danger of sinking.

British estimates of Japanese capabilities also played a role. The Royal Navy and the US Navy both seriously underestimated the effectiveness of Japanese aircraft and aviators in the run-up to the Pacific War. Despite enduring a relatively backwards economy, the Japanese aviation industry “peaked” at exactly the right time, providing world-class aircraft in 1941 and 1942. The IJN combined these aircraft with rigorously trained pilots, resulting in the world’s most effective anti-shipping force at the end of 1941. While the British expected the Japanese to perform below German standards, Japanese aircraft and pilots actually outdid their German counterparts.

The loss of the two ships gutted Allied plans to defend Singapore. HMS Prince of Wales was the most powerful surface unit in the Pacific (HIJMS Yamato would not enter service until later in December), and her sinking was a tremendous shock to local defenders and the British government alike. The United States Navy also took the defeat hard. That said, the squadron itself was by no means sufficient to defeat the Japanese naval offensive; the IJN simply had too many assets in the area. Dutch, Australian, British, and American forces scrambled to develop a defense for the rest of Southeast Asia, resulting in a series of defeats through the spring of 1942. The US Navy would eventually focus its efforts on a two pronged offensive across the Pacific, while the Royal Navy remained in the Indian Ocean until 1944.

The success of the Japanese attacks made clear that even modern battleships required air cover to operate in hostile areas. Several other battleships were lost in similar circumstances (mostly Japanese ships in 1944 and 1945), as American aircraft took advantage of growing air supremacy. Battleships could certainly contribute to their own defense from air attack, and could contribute to fleet air defense, but required the support of carriers to operate during the day. These lessons pushed all three navies to de-emphasize battleship construction in favor of aircraft carriers.

Military technological revolutions rarely happen all at one time; they generally result from the evolution of several unrelated trends that “suddenly” result in new military realities. This was surely the case of the transition from battleship to aircraft carrier; notwithstanding Billy Mitchell’s offenses against the captured German battleship Ostfriesland, aircraft of the interwar period generally lacked the capacity to destroy modern battleships under steam. By 1941 this had changed, however; competent aviators, in sufficient numbers, flying advanced aircraft could locate and kill even the largest battleships. Prince of Wales and Repulse were the sacrifice that opened the door to the new military reality.

(This first appeared in June 2017 and is being reprinted for reader interest.)