Battleship USS New Jersey is Getting Upgrades, But Not for a War 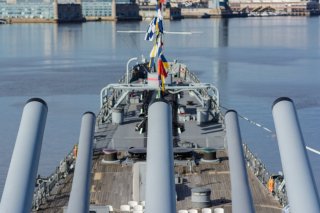 Here's What You Need to Remember: One of the most powerful battleships ever built for the U.S. Navy is getting a much-needed refurbishment – and it isn't to her weapons systems or sensors, but rather the decking.

One of the most powerful battleships ever built for the U.S. Navy is getting a much-needed refurbishment – and it isn't to her weapons systems or sensors, but rather the decking.

The Battleship New Jersey Memorial and Museum, which is located on the Camden waterfront on the Delaware River across from Philadelphia, will be getting some much-needed brotherly love in the form of a $500,000 Preserve New Jersey Historic Preservation Fund Grant, state officials announced.

The money will be used to address the issue of the deck of the USS New Jersey (BB-62), the Iowa-class battleship that has been a museum ship since the autumn of 2000. The ship, which is on several historic registers, was previously part of the U.S. Navy's mothball fleet, until the New Jersey State Review Board for Historic Sites recommended that it "be listed in the New Jersey Register of Historic Places, contingent upon the transfer of the battleship to New Jersey waters."

While the most decorated of the Iowa-class battleships, New Jersey won the most battle stars for combat actions, and was the only U.S. battleship to provide gunfire support during the Vietnam War. However, time and weather have been the biggest threat to the ship affectionately known as "Big J" or the "Black Dragon." All four of the Navy's World War II Iowa-class battleships were converted to museum ships with USS Missouri now in Pearl Harbor, Hawaii; USS Iowain Los Angeles, California; and USS Wisconsin in Norfolk, Virginia – USS New Jersey arguably must deal with the worst extremes that include the cold winters and hot summers along the Delaware River.

Visitors to the warship have had to deal with dings and holes in the rotted wood of the deck, which has been replaced in a piecemeal fashion since 2015 due to limited funds. Some sections had gotten so bad that it was considered a serious trip hazard. The decking was last replaced and upgraded before the Vietnam War. The original decking had been teak, but that is expensive so staff and carpenters have opted to find creative ways to cut down on its use while still retaining the historic integrity of the deck.

"This is a very exciting day for the Trust and Battleship New Jersey who are once again teaming up to preserve one of the most treasured and widely visited historic places in New Jersey," the state's Lt. Gov. Sheila Oliver, who also serves as Department of Community Affairs commissioner, told Patch.com earlier this month. "This grant round is going to breathe new life into the Battleship New Jersey's ongoing preservation work as well as to other heritage tourism sites throughout the state."

Battleship New Jersey has been impacted by the Covid-19 pandemic and was closed to visitors since August. It recently resumed limited weekend tours and maintained social distancing.

The majority of the museum's income, or $1.5 million, come from grants including New Jersey's Department of Environmental Protection.