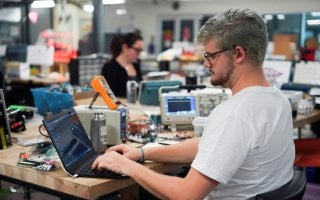 If nothing else, COVID-19 has demonstrated China’s ability to leverage its private sector, embrace technological solutions, and implement necessary changes in the face of looming threats.  Not without its criticisms, China’s rapidly released virus tracking mobile App allowed them to better control and monitor the spread of the potentially fatal fast-spreading virus.

This and many other of  China’s rapid response and advances are largely due to leveraging its own population and privately owned businesses.  Science, technology, engineering, and math (STEM) are pushing the world towards the biggest explosive growth since the industrial revolution.

From the cheap seats of my social distancing, China is leading the way.

While in the United States, a recent Universum survey of over 59,000 college students assessed the desirability of potential employers. For those studying engineering and other top STEM fields, working for the Department of Defense (DoD) didn’t rank in the top 100. Senior Army leaders increasingly cite the need for soldiers with specialty skills, but the interest of those qualified continues to wane.  The Armed Forces can’t compete with opportunities and benefits of private industry, so what if it stopped trying?

We can grow our forces and our capabilities as a nation by utilizing the talent where they are. It is time we leverage our best and brightest with a civilian auxiliary.

As COVID-19 sweeps the globe, the U.S. Military is recalling its medics and people with specialty skills to return to service.  Just as in the past, “Uncle Sam Needs You.” But the need extends far past this time of medical crisis.  Right now, we are in desperate need of additional medical personnel, but in the long run, Uncle Sam needs STEM.

Less than one-half of 1% of the U.S. population serves in the armed services today — the lowest rate since World War II.  An inability to meet standards in either health, physical fitness, education, criminality or some combination thereof disqualifies 71% of the population ages 17-24.

To put another way: over 24 million of the 34 million people of traditionally prime service age cannot serve their country in the armed forces - even if they wanted to.

The Army’s Recruiting Commander, Major General Jeffrey Snow, said: “We don’t want to sacrifice quality… The American public has come to expect a qualified Army that can defend the nation."

While warfighters have always been judged on their speed, endurance, fitness, and arms proficiency, the battlefield of today requires hackers, coders, data scientists, robotics engineers, and experts in artificial intelligence to join the fight.  These two groups of people have historically not shared a strong overlap. We have a chasm separating two groups;  the traditional warfighter with an honored history of defending our nation and the desperately needed STEM talent that is disinterested or disqualified.

We can bridge the gap.

A civilian auxiliary reserve force allows individuals to serve their country. It enables those who are eager to engage and work on defense solutions and technology to do so. A targeted survey of STEM consultants in the D.C. area in early 2020 revealed that many would be happy to serve our Military efforts, with no respect to pay or rank, just as an opportunity to serve their country. It opens the otherwise prohibitive gates of a full military lifestyle or adherence to warfighting medical and fitness standards. All while providing the military access to the private sector's brilliance without the limiting, time-consuming, and often bloated contracting processes.

The concept is not without precedent. Each branch of the military already has a reserve component, comprising only “part-time” service members.  There are even broader precedents throughout history, having civilians stand in and act in times of need for a particular purpose.

A report issued to Congress last month by a National Commission on Military, National and Public service called for a “Critical Skills Individual Ready Reserve.”  In short, highly qualified individuals willing to put on a uniform and join in a time of need.  However, the ‘need’ is ongoing, and the standards required to accompany the uniform aren’t necessary for a vast majority of STEM capabilities.

A civilian auxiliary called to augment the Department of Defense as well as the individual branches of the military will allow us to fill the STEM gap we are facing, connect willing civilians otherwise disqualified from service and stay agile, mobile, and relevant in the face of exponentially developing technology.

The landscape of modern innovation isn’t something that is bound to slow down.  The world is competitive and often unforgiving.  Moreover, we can no longer ignore the inevitable challenge our nation faces with respect to China’s hegemonic ambitions.   As Major General Jeffrey Snow proposed, we can’t lower our standards to meet the mission without compromising our military.  It is time then we change the definitions of service to ensure we don’t fall behind on what will be undoubtedly the battlefield of tomorrow.  A civilian auxiliary allows for both.

Kirk Westwood is a communications and media consultant and a Lieutenant in the Army Reserve Innovation command.