Belarus Protests: Why People are Still Taking to the Streets 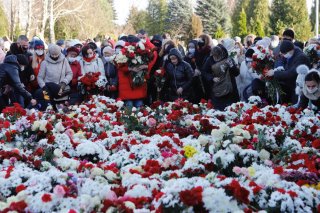 Since the presidential elections in Belarus in August 2020, hundreds of thousands of people have taken to the street to oppose Alexander Lukashenko’s regime. According to official figures, the longstanding president won the election with a vote share of 80%. But widespread reports of electoral fraud and large-scale mobilisation against the result speak to a different reality.

The state responded to these protests with extreme violence, but this seemed to bring more people out on to the streets. Six months later the protests continue – although in response to the repression, protesters have adjusted their strategies and now focus on organising smaller local marches and neighbourhood actions.

We still know little about the protesters and the range of political views they may hold beyond their shared aim to overthrow Lukashenko. We know even less about the current attitudes and expectations of the general population. To find out more about these questions, the Berlin-based Centre for East European and International Studies has conducted one of the first large surveys since the start of the mass protests – and these are the initial findings.

In view of safety concerns, our December 2020 survey was carried out online. It included 2,000 Belarusians aged between 16 and 64 living in cities with more than 20,000 inhabitants, chosen by quota to reflect the population in terms of age, gender and place of residence.

Overall, 14% of the respondents in the survey said that they had participated in protests since the presidential elections, although about 6% refused to answer the question – which might reflect concerns about safety. At first glance this might appear at odds with the images of streets packed with protesters. But it means that at least 700,000 of the 5 million people represented in the sample must have protested.

Compared to previous political protests in Belarus around elections or social welfare reforms, levels of participation have been high. Only about 4% of our respondents said they had taken part in protests before 2020. This confirms a previous survey we conducted in 2019 among young Belarusians (up to 34 years old), which showed that protest participation among young people had been very low at only about 3%.

You didn’t have to actually be involved in the current protests to have been politicised by them. Half of our respondents told us they knew someone who had taken part in the protests since August. Moreover, 20% of respondents said that either they themselves or friends and family members had suffered violence during the protests.

Data shows that young Belarusians, aged 16-26, have been disproportionately affected during the protests by violence inflicted by security personnel. They were also the most likely (alongside people living in larger cities) to know someone who had taken part in the protests. Nearly 80% of those who report having protested said they had been mobilised by the violence.

Images of the injuries inflicted upon the thousands of protesters arrested during the first days of the protests circulated widely on social media. Reports of torture – and visual evidence shared by people after their release from custody were the trigger for the protests to turn into mass mobilisation. Violent repression thus constitutes a risky strategy on the part of the regime, as it proves impossible to stop the circulation of images and individual stories that alienate people further from the state and increase criticism of the country’s political system.

And what of the people who stayed at home? Two very different profiles emerge. On the one hand, there are the “silent loyalists”, a share of around 20%, who said they didn’t protest because either they don’t believe protests change anything or they suspect that the protesters were hiding their real motives. Another 20% said they simply weren’t interested in politics. There were also the “silent opponents”, about 25% of our survey sample. These people mainly said they would have liked to take part in the protests but were afraid to do so.

The Belarusian population has a clear sense of what the protests are about. Of the many different response options we provided when asking what the main aims of the protests had been, the main responses were: the organisation of new free and fair elections, the resignation of Lukashenko, the investigation of violence committed against protesters and the release of all political prisoners.

This diversity of views underlines the complexity of the situation. In particular, older people tend to be opposed the protests, but also 35% of women somewhat or completely disagreed with the protests (as opposed to 27% of men). People with lower levels of education were also more likely to disagree with the protests.

The mass protests and the high degree of politicisation in society that our survey highlights suggest that public trust in the state can only erode further with continued repression. So far there is no clear trajectory for political change emerging. In that context, outward migration – in particular by the young and educated – is likely to be a significant trend, alongside a society distanced from the political class.