Belarus's Leader Tried to Rig an Election. He Got a Bigger Fight Than He Was Expecting. 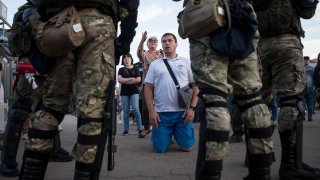 Belarusian opposition leaders knew beforehand that they would be protesting the falsified result of the presidential election this past weekend, and had already adopted three governing principles. Their demonstrations must be absolutely peaceful, they must be sustained and they must seek specific objectives, including free elections and the restoration of the country’s democratic constitution.

Now that Belarusian President Alexander Lukashenko has essentially nullified the election, claiming—preposterously—that some 80% of Belarusians voted for him, supporters of the opposition candidate, Svetlana Tikhanovskaya, are putting these principles into practice.

The regime’s opponents are disciplined and technologically savvy. Because the central authorities completely control the official media, an alternative media ecosystem has emerged online, where independent publications’ readership has grown by 300–400% in recent weeks.

By contrast, Lukashenko is still clinging to the 1990s. After five terms in office, he seems to have learned nothing. Having proved incapable of countering independent reporting, he has resorted to shutting off the internet and mobile phone networks at opposition rallies. But Belarusians have quickly found ways around this through the use of proxy servers and end-to-end encrypted messaging (in fact, I dictated this commentary over the phone, owing to the internet blackout).

No one seriously doubts the pervasiveness of election fraud in Belarus. But, rather than succumb to despair or cynicism, Belarusians have refused to accept that there is no point in voting. On election day, voters gathered at polling stations in droves, building up a critical mass to prove that there was a significant turnout. Observers sat outside and recorded the number of people entering. Although they couldn’t ask people how they voted, they counted how many were wearing the white ribbons of the opposition.

The observers’ mere presence was a clear demonstration that Lukashenko can no longer rely on repression and fear. Belarusians have increasingly begun to express their views openly, even in smaller towns and villages. My own firsthand observations match those of independent analysts who have estimated that roughly two-thirds to three-quarters of the electorate supports the opposition.

While here, I have asked many poll watchers how they remained so determined, given that everyone knew their votes wouldn’t be counted, and that the fraudulent result would be announced immediately. They explained that these tactics would prove effective in the long run, because they serve as a visible demonstration of what free and fair elections should look like.

No one can deny that Tikhanovskaya’s supporters were there, and that they were committed to voting. That fact alone will sow uncertainty among Lukashenko loyalists, including those who make up the electoral committees.

After assembling en masse and observing the polling stations, the next step was to launch demonstrations in response to the long-foreseen outcome. The plan was that, after gathering at polling places at around 6 pm and demanding to hear the voter-turnout count at 8 pm, everyone would move to pre-designated sites for mass mobilisation. In smaller towns, everyone knew to gather in the largest square. In Minsk, the meeting point was Victory Square, near the Minsk Hero City Obelisk. If the way was blocked, people knew to head instead for Independence Avenue, followed by Victors Avenue.

The assembly quickly took shape in Victory Square and gradually grew, spreading in multiple directions. Cars honked and people sang and played the Perestroika-era song ‘Khochu peremen!’ (‘Want to change!’) by the Soviet rock band Kino. Special police units, having clearly prepared for the moment, showed up on cue to intimidate the crowd, which responded by chanting, ‘All together!’ Then, a column of several dozen armoured vehicles rolled in and closed off a key intersection. Step by step, phalanxes of police arrived and claimed more space.

Nonetheless, the protesters remained peaceful, and consistently made clear that they didn’t consider the police their enemy. Many chanted, ‘The police with the people!’ The implied message was: We understand that you’re just following orders, and would probably prefer to be anywhere other than where you’re standing.

Again, these tactics have long been in the making. On the night before the election, opposition leaders told me that they have no doubt that almost everyone in Lukashenko’s own ranks deeply dislikes him. The open displays of kindness towards the same security forces who are expected to beat protesters are designed to exploit these divisions, by letting security forces know that they don’t have to be synonymous with the Lukashenko regime.

At one point, several hundred policemen with large shields and batons emerged from the column of vehicles, occupying part of the square and launching explosives and flash grenades. I don’t know whether they were firing rubber bullets, blanks or live ammunition, but the intent was clearly to instill terror in the crowd.

In the event, their efforts at intimidation were only moderately effective. The protesters did not retreat fully, and they remained absolutely peaceful. They kept a close eye on any potential provocateurs in their ranks, corralling anyone who took up bottles or other objects to throw at the police.

The dark squadrons of shielded security forces who occupied the square took a long time in doing so, and clearly were not trying to force a violent confrontation. Only at the end did the police start chasing fleeing protesters and running towards the crowd.

The square is open on three sides, but movement is impeded in some places. This is where some demonstrators were caught and beaten. Soon thereafter, Reuters reported that some 1,300 people had been detained; other independent media sources indicate that several people are in critical condition, and that at least one died after being deliberately run over by a police truck.

The demonstrations are now expected to grow. What we have seen so far is merely the beginning. The opposition has it all planned out. Every day, people know to meet in the squares at 7 pm, where peaceful protests will continue, organisers say, until they are no longer needed.

This article by Slawomir Sierakowski first appeared in The Strategist on August 12, 2020.