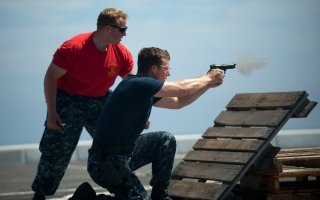 Here's What You Need to Know: The M9, like other mediocre weapons, will likely go into history with a whimper and not a bang.

In January 1985, the U.S. Army made a fateful decision that would send shockwaves through the firearms industry: the service chose a foreign company to replace its arsenal of Colt pistols. The controversial choice of the Beretta 92FS as the standard handgun for the U.S. armed forces marked the end of an era, shifting away from larger calibers and towards higher capacity magazines and modern designs. The Italian handgun also established a beachhead for European firearms and makers on the U.S. market, helping make Europe’s gun makers the household names they are today.

The history of Beretta goes back to the sixteenth century, when Bartolomeo Beretta produced 185 arquebus barrels for the Arsenal of Venice. The company, has made firearms ever since, helmed by fifteen consecutive generations of the Beretta family, arming armies from Napoleon to Mussolini. In the late 1970s, Beretta decided to bid on its most ambitious project to date: the 2.1-million strong United States Armed Forces. The Joint Service Small Arms Program (JSSAP), meant to pick out a replacement for the venerable Colt 1911A1 semi automatic pistol for the U.S. Military, promised to be the most lucrative single contract in history.

According to noted small-arms author Leroy Thompson, JSSAP came about after Congress expressed concern “about the approximately 590,000 handguns in US military service, of which only 73 percent were deemed serviceable. Within the 590,000 were more than twenty-five handgun types with myriad types of ammunition.” The winner of the JSSAP would replace these handguns with a single, modern design that used a single type of ammunition. Infantry officers, Navy personnel on warships, and Air Force pilots would all use the same handgun.

The M1911A1 handgun, which made up the majority of existing U.S. service pistols, was originally introduced in the 1920s and naturally there was a lot of new technology the military wanted rolled into a new handgun. JSSAP criteria had more than eighty criteria for the new handgun, chief among which was 9-millimeter caliber, a minimum ten round magazine (ideally thirteen or more), ambidextrous controls, double action/single action operation, a reliability rate of no more than eight malfunctions per five thousand rounds fired, a thumb safety, a decocker and a firing pin lock.

Beretta’s entry to the JSSAP competition was the Beretta 92SB-F. Sleek and modern looking, the 92SB-F was the latest in a long line of pistols that began with the Beretta 1915. The 1915 was a simple, compact pistol that held eight rounds and was chambered in 7.65x17SR Browning. The 1915 was issued to Italian troops in World War I and was followed by the Beretta 1934, which was standard issue to the Italian military in World War II. This was in turn followed by the Beretta 1951, also known as the Brigadier, a full-sized pistol chambered in the modern 9-millimeter Parabellum cartridge.

The Model 92S-1, was a modernized version of the Brigadier. An all metal handgun, the M92 had an aluminum frame and steel slide. It was a double action/single action pistol, with the first shot being double action (a single long pull cocked the piston and pulled the trigger, releasing the round) and subsequent shots optionally single action. The handgun handily checked off the military’s list of desired new features, including the thumb safety, decocker, and firing pin lock. Each magazine held fifteen rounds of nine millimeter parabellum, and a basic load of ammunition consisted of three magazines with a total of forty-five rounds—quite different from the 1911, where three magazines held only twenty-one rounds. The M92 weighed 2.6 pounds loaded.

The JSSAP tests began at Eglin Air Force Base in 1979 and involved the Beretta Model 92S-1, Colt SSP, three versions of the FN (Browning) Hi-Power, Star Model 28, the Smith and Wesson Model 459, the Walther P88, and Steyr GB. The Colt 1911A1 and Smith & Wesson Model 15, already in service, were also tested to provide a baseline of performance. Tests involved a number of factors, but chiefly focused on Reliability, Availability, and Maintainability.

The Beretta the 1979 trials, but Army officials charged the Air Force personnel conducting the tests had failed to demonstrate scientific rigor. The Army re-ran the tests in 1983–1984, with the winner to be named the XM9 handgun, later the M9 handgun. Of all the handguns submitted to round two, only the Sig Sauer P226, a new entrant, and the Beretta M92 SB-F, passed all tests. In January 1985, the Army chose the Beretta, designated it the M9, and placed an order for 321,960 pistols. It had taken the armed forces five years to choose a new handgun.

The M9 served in the U.S. military for nearly thirty years, though not without controversy. U.S. Navy SEALS, whose intense training place a high round count on their M9s encountered cracking slides, including at least one injury, and ended up procuring the Sig P226 for their own use. In a 2006 report by the CNA Corporation, the M9 reported the lowest levels of user satisfaction and soldier confidence. Twenty six percent of respondents claimed their M9s had malfunctioned in combat, and fifteen percent claimed their M9s could not empty a magazine without jamming at least half the time. Among US small arms used in Iraq, the M9 was the least favorably rated.

The military’s adoption of the M9 boosted Beretta’s sales in the American civilian and police market, and European arms manufacturers such as Glock, Sig Sauer, Heckler and Koch and Beretta experienced an explosion of popularity. In 2016 the major European arms exporting countries, Austria, Croatia, the Czech Republic, Germany, and Italy collectively exported 2.6 million handguns to the United States.

The adoption of the Sig Sauer P320, also known as the M17 Modular Handgun System, will see the M9 permanently retired. Unlike used M1911A1 handguns, which have been widely sought for purchase by civilians under the government-sponsored Civilian Marksmanship Program, there is no great clamor to purchase a newly retired M9. The M9, like other mediocre weapons, will likely go into history with a whimper and not a bang.