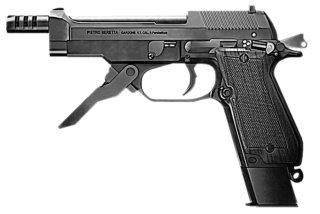 The machine-pistol was hardly a new concept when, in the 1970s, Italian gun-maker Beretta began developing the 93R, a sleek little weapon that practically spews bullets.

Machine-pistols first appeared during World War I. In the 1920s and ’30s Spanish manufacturers Astra and Star produced fully automatic versions of the Mauser C96. In the mid-1930s, Mauser introduced the purpose-designed Schnellfeuer machine-pistol.

Igor Stechkin developed the Stechkin APS in the 1950s. In the ’70s, Heckler & Koch introduced the VP70. Around the same time, Beretta caught the machine-pistol bug.

The nine-millimeter-caliber 93R — the R indicates raffica, Italian for “burst” — borrows the basic design of the contemporary Beretta 92 pistol but includes several changes. It has a longer, 15.6-centimeter barrel with ports that function as an integrated compensator. It features a selector switch to allow three-round bursts plus a folding metal foregrip and detachable stock.

As with all machine-pistols, the light weight of the 93R’s recoiling parts means that it boasts an extremely high rate of fire — more than 1,000 rounds per minute. The three-round burst capability, as opposed to full-auto, makes the weapon more controllable than many other machine-pistols are.

The Beretta 93R feeds from a 20-round magazine but can also take the standard 15-round magazines used by the Beretta 92. While outwardly similar to the 92, the 93R is a larger weapon. Parts interchangeability is minimal. The 93R’s trigger mechanism is completely different than the 92’s is.

The 93R is also slightly heavier, weighing 1,170 grams compared to the 92′s 950 grams. Beretta mounted the 93R’s safety on the weapon’s frame, using the same pin as the fire selector.

Production of the 93R ceased in the 1990s, but the NOCS and GIS continue to use the weapon. It has appeared in many films, television shows and video games.

This article by Matthew Moss originally appeared at War is Boring in 2017. It is being reposted due to reader interest.