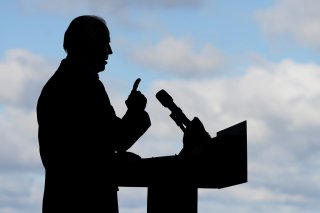 The world is gripped by fevered speculation regarding the outcome of the US presidential election. Will there be a second term for Donald Trump, or will Joe Biden best him at the polls? In a recent tweet, betfair.com, a British online gambling company, showed that more money has already been bet on this election on its exchange than on the 2019 Grand National horse race, the 2018 men’s football World Cup final and the Conor McGregor vs Floyd Mayweather boxing match combined.

While we’ll know a lot more once the ballots begin to be counted (although this, in itself, could be a protracted and contentious process), there is currently a very wide array of opinion about what the most likely result will be.

Traditionally, both media coverage and scholars have focused on public opinion polls in evaluating likely election outcomes. Here, Biden has a commanding lead of 7-8% nationally, when you aggregate across various polling companies. In fact, sites such as Real Clear Politics and FiveThirtyEight show a remarkable stability in Biden’s polling advantage in recent months, in what has often felt like a chaotic and unpredictable campaign.

As we discuss in our weekly podcast (which can be found here (Apple) or here (Spotify)), many polling analysts have pointed out, Biden’s polling lead is larger and more consistent than Hillary Clinton’s in 2016. There are far fewer undecided voters (estimated at about 3% in this cycle as opposed to 11% in 2016), and, of course, there’s been a massive upturn in early voting. Crucially, Biden also holds (admittedly narrower) polling leads in the “battleground” states that will be crucial to the election outcome.

Forecasters who use polls to create an estimate of the likelihood of election results are therefore bullish about Biden’s chances – with FiveThiryEight giving the Democratic nominee an 89% chance and the The Economist forecast going as high as 95%.

But the election gamblers are considerably more cautious. When you translate the odds available for Biden across a range of gambling companies into probabilities, they give him a 64% chance. While this has ticked up as the campaign has unfolded (and particularly following Trump’s COVID-19 diagnosis) there remains a striking discrepancy. Why is this the case?

Can polling be trusted?

Fundamentally, the difference comes down to doubts about the validity of polling as a means of ascertaining voting intention in this election. While the electoral college gives Trump an in-built advantage, this is taken into account in poll-based forecasts. Furthermore, while polling error is also factored in, many people are betting that the polls are systematically biased against Trump.

As a recent article in The Hill explained, there are several mechanisms that could create such an outcome. In the first place, there is something called social desirability bias, which arises when a certain survey answer is perceived to be potentially offensive to the interviewer. With American politics as highly polarised as they are, voters might be “shy” about admitting their true intention to vote for Trump.

Second, there is a wider process in play whereby the polling industry is increasingly being conflated with the “lamestream media” in American political discourse. This might lead to a refusal of some likely Trump voters to participate in polling, and may encourage others to seek to “punk” pollsters by deliberately misleading them.

In such a scenario, it is extremely difficult to know how much the polls can be trusted – and this, alongside the memory of the way the 2016 election result was so wrongly predicted, helps to explain the relative caution of the betting markets.

It also shows us just how much is at stake in this campaign for the polling industry. In order for the election to be close run, or for Trump to win, the polls would have to be systematically biased against him to the tune of about 5% nationally. The very consistency of polling would, in retrospect, be damning for pollsters, and massively diminish the allure of polling in both future election races and day-to-day political coverage.

It is likely that polling companies are aware of this, which throws up a further possibility – what if Biden’s support is being systematically underestimated? With pollsters incentivised to seek out and weight Trump supporters in their analysis – while likely to face little recrimination for underestimating Biden’s support – this is not as unlikely as it may seem.

So where does this leave us? Well, as the baseball-playing philsopher Yogi Berra is often quoted as saying: “It’s tough to make predictions, especially about the future.”

One key consideration is that even the most bullish forecasts for Biden are not absolute, and they leave (admittedly narrow) scope for Trump to win. Biden has certainly run a frontrunner’s campaign, largely aiming to avoid mistakes and lately focusing his campaign activities on traditionally “red” states. In a few short days, we’ll discover whether this was smart strategy or electoral hubris.