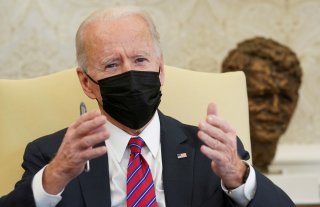 One of the historic firsts the Biden administration has not touted is how its $1.9 trillion “American Rescue Plan” would provide an unprecedented amount of completely untargeted federal unemployment benefits. That is, if enacted, the president’s plan would pay the same duration of federal benefits in all states regardless of their unemployment rate. Counting typical state benefits, that would provide more than 18 months of unemployment checks — the longest course ever paid — in a growing number of states with low unemployment rates.

That is, until now. As the table below displays, today’s temporary federal program, called Pandemic Emergency Unemployment Compensation (PEUC), currently offers 24 weeks of benefits in all states, with no targeting of any of those payments to high-unemployment states.

While proposing to extend current temporary programs, the Biden plan makes no mention of targeting benefits to high-unemployment states. For example, regarding recipients under one current temporary federal program, the plan says simply the president “supports increasing the number of weeks these workers can receive the benefit.” In the context of “calling on Congress to extend these and other programs” through September, that means his plan would expand benefits by 29 weeks — while continuing the current practice of no targeting. Thus, the same 53 weeks of federal benefits would be payable in the seven states with current unemployment rates below 4.0 percent as in the nine states with rates above 8.0 percent.

That lack of targeting is at odds with recent legislation introduced by Senate Democratic leaders, which would permanently tie the payment of federal unemployment benefits to elevated unemployment rates. If enacted today, that proposal would offer fewer than the president’s proposed 53 weeks of federal benefits in over two-thirds of states with relatively low unemployment rates, while offering more weeks in the remaining one-third of states with relatively high rates.

The president’s proposal could evolve as Congress turns it into legislation, targeting some of its proposed benefits to where need is greater. If so, that would bring his proposal more in line with bipartisan agreements providing benefits in the past as well as how his fellow Democrats propose paying benefits in the future. Without such adjustments, and counting up to 26 weeks of state benefits, the Biden plan promises the unprecedented: over 18 months of unemployment benefits — including $400-per-week bonuses — even where low unemployment suggests jobs are readily available.