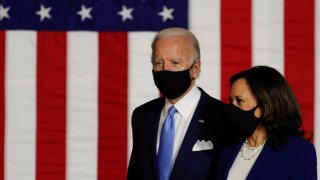 For much of the world, the possibility of a new United States administration led by Joe Biden and Kamala Harris offers the promise of a foreign policy reset.

America’s European alliances would be strengthened, not disparaged. Partners in North Asia, like Japan and South Korea, and in Southeast Asia would be reassured that there will be no American military withdrawal or retreat. Relations would be mended with neighbours Mexico and Canada, and Central America would be seen through more than just the lens of illegal immigration. Biden and Harris would likely re-enter the Paris Climate Accord and rejoin the World Health Organization and other multilateral bodies.

With a black American woman as vice president, African countries would no longer be derided as, in President Donald Trump’s words, ‘shitholes’. And Harris, whose mother was an immigrant from India, would also become the highest ranking Asian American ever to hold high office in the US, and would help cement India’s affinity with the United States.

But a change in Washington would not offer any respite for one county: China.

A Biden–Harris administration would likely continue with Trump’s tough-on-China policies, even if the tenor and tone improve.

Biden and Harris are both foreign policy traditionalists from the Democratic Party’s mainstream centre-left, and both are strong internationalists more likely to build multinational alliances against the perceived threat from a resurgent and belligerent China. A Biden–Harris administration would be tough on trade imbalances. They would seek to hold Beijing to account for its spying, its interference in American elections and its human rights abuses, while at the same time keeping the dialogue between the superpowers from degenerating into name-calling and angry tweets.

This was largely the consensus from China experts on a recent panel I moderated at the Foreign Correspondents’ Club of Hong Kong, as well as from other China watchers and experts. ‘The assessment of the challenges that China poses to America and the world would be the same’, said Bonnie Glaser of the Center for Strategic and International Studies in Washington. But, she added, China ‘would not be seen as an existential threat’.

Lingling Wei, a Wall Street Journal China correspondent and co-author of a new book called Superpower showdown: how the battle between Trump and Xi threatens a new cold war, agreed. ‘If Biden is president, the tone will be better.’

One of the reasons for the likely continuity in China policy is Americans’ growing negative perception of China and its leader, Chinese Communist Party General Secretary Xi Jinping. A recent survey at the end of July by the nonpartisan Pew Research Center found that 73% of Americans had an unfavourable view of China, and 77% had little or no confidence in Xi to do the right thing.

Those assessments were largely driven by negative views of China’s handling of the coronavirus pandemic, with 78% blaming China’s initial mishandling of the virus for causing a global pandemic. More Americans now see China as a competitor, not a partner.

The souring of American views on China is new, though it predates the coronavirus. As recently as 2011, during President Barack Obama’s first term, a majority of Americans had a positive view of China. But that began to change as more Americans began to see China as an economic threat and a military challenge.

One thing that has changed is the attitude of the American business community, which for years provided both the ballast and the jet fuel propelling Sino-American relations. Whenever relations went bad between Washington and Beijing, American businesses could always be counted on to soothe the tensions, particularly with their Republican allies in the US Congress.

No longer. In recent years, American business has increasingly cooled towards China, particularly under Xi. China has repeatedly reneged on promises to liberalise its controlled economy and open it up to more foreign competition. US firms continue to feel disadvantaged, forced to share their technology and blocked entirely from key sectors. And Beijing became more aggressive, raiding the headquarters of foreign companies ostensibly for tax reasons.

An American businessman friend of mine, who has been working in China for three decades, was recently haranguing me about how awful Trump was as president, from his racism and divisiveness to his denigration of longtime foreign allies. Then he paused, looked over his shoulder around the crowded bar and whispered, ‘But I love what Trump is doing to China!’

That attitude is widespread. Even Democrats who loathe Trump believe the time for a reckoning with China was overdue. In many ways, Trump is merely giving voice to long pent up frustration with China as an economic rival that ignores established rules, a belligerent competitor and a malign actor on the international stage.

Since President Richard Nixon’s diplomatic opening in 1972 and through China’s ascension to the World Trade Organization in 2001, the establishment wisdom on China—the so-called Washington consensus—was that as the country engaged with the West and became more prosperous, so too would it become more open and democratic. That was what happened in other authoritarian Asian countries like South Korea and Taiwan, where economic liberalisation created middle classes that eventually fuelled demands for more political openness.

But the theory failed in China. The country did open economically and became enormously prosperous. China in 2010 surpassed Japan as the world’s second largest economy, and now rivals only the United States as an economic power as measured by gross domestic product.

But a wealthier China has also become more repressive. The CCP under Xi has cemented its control, quashing all dissent and creating an alternative political and economic system to rival the West. And China has also become more belligerent militarily, using its navy to enforce its claims in the South China Sea and threatening the self-governing island of Taiwan. Xi’s ‘Made in China 2025’ plan aims to make the country a leader in high technology, artificial intelligence, robotics and clean energy—all at the expense of American primacy.

A Biden–Harris administration, if it comes to pass, would inherit a vast array of overseas challenges, from whether to restart the Iran nuclear deal to how to handle North Korea and the ongoing instability in places like Syria and Yemen. Most of America’s international relations will be easy to repair, as Trump’s term in office would be seen as an unfortunate aberration.

But on dealing with China, a new Democratic team in Washington is likely to find a rare bipartisan consensus for more confrontation. That, more than anything else, might be Trump’s most lasting legacy.

This article by Keith B. Richburg first appeared in The Strategist on August 17, 2020.