Biden and Trump Have a Lot in Common on Israel 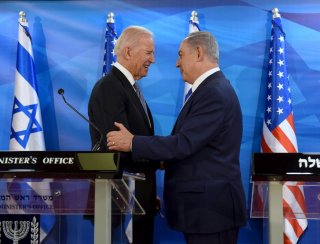 When the Taliban recently voiced its hope that Donald Trump would win a second term because he would withdraw U.S. troops from Afghanistan, it was a reminder that the 2020 U.S. election has big implications for the Middle East – and, by consequence, for American national security.

Foreign policy barely registers on Americans’ election agenda this year in a race dominated by the coronavirus pandemic, economic woes and structural racism.

Nonetheless, the United States’ global role is on the ballot in November. Trump has an “America First” vision in which narrowly defined U.S. interests rank as more important than helping maintain the global order. Biden, whose decades of foreign policy experience include chairing the Senate Foreign Relations Committee, wants to restore the United States’ international stature.

A Biden win would change American foreign policy significantly. But my research on U.S. policy in the Middle East suggests the United States’ actual engagement there might only show cosmetic changes.

Trump came to office promising to tame Iran, end the Islamic State and make “the deal of the century” between Israel and the Palestinians.

But he has executed no grand strategy in the Middle East.

Today Iran is emboldened, there’s no Israeli-Palestinian peace deal and, despite Trump’s claims, the Islamic State still exists. Trump withdrew the U.S. from a 2015 international agreement that restricted Iran’s nuclear program in exchange for lifting sanctions. But restoring sanctions has not curbed the Iranian government’s regional influence, much less forced regime change.

New sanctions just imposed on Iran’s banking system, for example, are mostly just making life harder for ordinary Iranians during a pandemic by reducing the value of the Iranian currency.

One consistency in Trump’s Middle East policy is Israel. Trump steadfastly supports its escalating opposition to Iran and aggressive policies in the Israeli-occupied West Bank and Gaza territories. Trump also departed from decades of settled U.S. policy on Israel’s capital, Jerusalem – a holy city for Muslims that the Palestinians likewise claim as their capital – by moving the U.S. embassy there from Tel Aviv. This shift angered Muslim nations across the Middle East and beyond, and effectively killed hopes of peace with Israel.

The Trump White House scored one diplomatic victory in the region by normalizing relations between Israel and two Arab nations, the United Arab Emirates and Bahrain.

In numbers, that matches what presidents Bill Clinton and Jimmy Carter together achieved in the Middle East: Carter normalized Israeli ties with Egypt and Clinton with Jordan. But without a just solution to Palestinian demands for statehood, critics say, genuine peace with Arabs is not possible.

Either way, Trump has unquestionably altered the geopolitics of the Middle East, pushing aside Israel-Palestine as the region’s main conflict. For both the U.S. and leading Arab nations, the priority is now stopping Iran from developing nuclear weapons and reducing Iranian attacks on American interests and allies.

If Biden wins the election, he would have to contend with more hostile U.S.-Iran relations than what he and Barack Obama bequeathed to Trump in 2016.

In a CNN op-ed when Biden promised to rejoin the 2015 Iran nuclear deal, Biden wrote that through greater cooperation, he believes Iran can be pacified. Rejoining the deal – signed by the U.S., China, Russia and several European powers – would have the effect of improving frayed U.S. cooperation with those nations, too.

But increased engagement with Iran would hurt U.S.-Saudi relations, which have grown closer under Trump’s son-in-law and Mideast adviser, Jared Kushner. Saudi Arabia is entangled in what it considers to be a zero-sum struggle with Iran for domination of the Gulf region. The Saudis see U.S. pressure on Iran as a key component of its strategy to contain Iranian influence.

Biden has also signaled that the U.S. will no longer support Saudi Arabia in its devastating intervention in Yemen’s civil war.

Iraq, Syria and Libya are all also embroiled in civil wars, conflicts that Biden – who believes the U.S. has “an obligation to lead” – would have to decide how to engage with.

Biden would also contend with a new development in the Middle East: Turkey, which now has military presence in Syria, Iraq, Qatar and Libya. Trump has largely accommodated Turkey’s growing regional assertion of its influence.

Biden’s rhetoric about Israel differs from Trump’s. In May he came out publicly against Israel’s proposed annexation of the West Bank – an inflammatory plan that the Trump administration may have quietly opposed but would not condemn. Israel has since suspended that plan as part of the United Arab Emirates deal.

But there’s no sign the United States’ Israel policies would differ substantively under Biden. His campaign has repeatedly stated its “ironclad” support for Israel, condemning any effort to boycott the country or withhold aid to force policy change. As vice president, Biden in 2016 helped get the country its biggest ever U.S. aid package, US$38 billion. Biden has already announced he would not move the U.S. embassy back to Tel Aviv if elected.

The U.S. is Israel’s strongest ally. Every American president since 1973 has given substantial foreign aid and military technology to the Israelis while shielding Israel from international condemnation over its policies toward Palestinians.

Palestinians almost certainly won’t get their land back under Biden. But they could get more money and political support. Biden promises to restore some of the $600 million in U.S. aid to the Palestinian Authority and to the United Nations agency for Palestinian refugees, among other agencies. Trump eliminated that funding last year in a failed effort to force Palestinians to accept his peace plan.

Obama created some goodwill in the Mideast, which may help Biden. But the region presents challenges that have for decades stymied American presidents, Democratic and Republican alike.