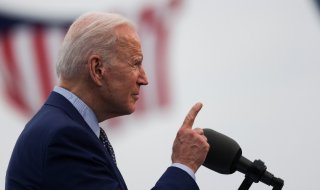 Here's What You Need to Remember: Take note that if the $1.8 trillion American Families Plan eventually gets green-lighted, the child tax credit will be expanded even more—potentially giving parents and legal guardians a total of up to $16,200 of cash per child.

It appears that former President Donald Trump was onto something last year.

Much like his predecessor, President Joe Biden is tapping into direct mail and similar letter formatting to boast about his role in successfully delivering millions of coronavirus stimulus checks to cash-hungry taxpayers under the $1.9 trillion American Rescue Plan.

“On March 11, 2021, I signed into law the American Rescue Plan, a law that will help vaccinate America and deliver immediate economic relief to hundreds of million Americans, including you,” Biden writes in the letter sent via the Internal Revenue Service.

The president later adds: “When I took office, I promised the American people that help was on the way. The American Rescue Plan makes good on that promise. … I truly believe there's nothing we can’t do as a nation, as long as we do it together.”

Currently, the IRS and the Treasury Department are winding down their disbursement of the remaining stimulus checks, of which only about 15 percent have yet to be sent out. The total number disbursed to date is now approximately one hundred sixty-three million, valued at about $384 billion.

More focus now seems to be on the expanded child tax credit under the American Rescue Plan. The IRS already has confirmed that monthly payments from the new $3,000 or $3,600 child tax credit, which amounts to essentially a “fourth” stimulus check, will start landing in the bank accounts of millions of American parents beginning in July.

“We will launch by July 1 with the absolute best product we are able to put together,” IRS Commissioner Chuck Rettig recently said.

Biden’s legislation enabled the expansion of child tax credits that generally allowed families to claim a credit of up to $2,000 for children under the age of seventeen. But that has been branched out to lower-income families who otherwise wouldn’t receive such a cash windfall.

With this change, families are now eligible to claim as much as $3,600 per year for a child under the age of six and up to $3,000 for children between six and seventeen—meaning that for family headed by a couple earning less than $150,000 or an individual making under $75,000, they now qualify to receive a $250 or $300 payment each month.

Take note that if the $1.8 trillion American Families Plan eventually gets green-lighted, the child tax credit will be expanded even more—potentially giving parents and legal guardians a total of up to $16,200 of cash per child.

These parents with children living at home could receive a monthly $300 check per each child through the end of 2025.