As Biden Pivots East, Australia Must Be There to Meet Him 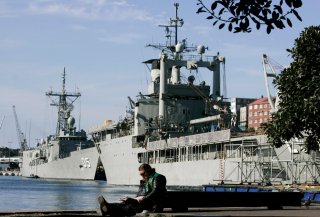 In more normal times, when nuclear-powered submarines and multibillion-dollar contact cancellations didn’t dominate the news, plans to increase the US military presence operating out of Australia would be big news.

It was swamped by the AUKUS announcement, but the annual AUSMIN meeting between Australia’s foreign affairs and defence ministers and their US counterparts in Washington in September did include the clear ambition to increase US forces’ presence at and operation through Australian facilities.

With the release of President Joe Biden’s decision to approve the recommendations made in the global posture review, it’s time to realise the significance of the moves that are likely to be underway in our near future, if the indications from Australian and US political leadership are taken seriously.

The Pentagon’s announcement was short on details, but in its mere two pages of text it found room to say:

It is no surprise that the Indo-Pacific is the priority region for the review, given the secretary’s focus on China as America’s pacing challenge. The review directs additional cooperation with allies and partners to advance initiatives that contribute to regional stability and deter Chinese military aggression and threats from North Korea …

These initiatives include seeking greater regional access for military partnership activities, enhancing infrastructure in Guam and Australia and prioritizing military construction across the Pacific Islands. They also include new US rotational aircraft deployments and logistics cooperation in Australia.

So, the Indo-Pacific and Australia specifically are priorities, although it’s not clear exactly how or when that will be demonstrated. That’s because it’s not in the gift of the Pentagon or the White House to create places where US forces can operate in others’ countries with local partners. This is deep international politics. Access negotiations are among the most difficult areas of military diplomacy, particularly in an environment of great-power competition and tension. US partners have a key role in getting practical outcomes.

US decisions on where in the Indo-Pacific it will disperse its forces—army, navy, air force and marines—will be directly influenced by the political environment in particular places, the geographic advantages of locations, the industrial support available and the partnerships that an increased US force presence will enable. On all these factors, Australia scores highly, with the north of the country providing access to Southeast Asia and the west providing access to the Indian Ocean.

The other critical factor to making this happen rapidly is Australian decision-making and investment to begin to build these expanded facilities to meet the needs of our own forces and those of our partners. This combination of politics, geography, direct military partnership and Australian investment provides all the ingredients to make Australia a ‘deployment and sustainment hub’. Doing this requires Australian money in the order of billions to expand facilities at Stirling naval base in Western Australia and in Darwin harbour, along with associated air facilities in the north and west.

In northern Australia, it probably also means starting something new with the US Army, whose Pacific element is larger than the whole Australian Army and which is seeing its future as dispersing from its long-term primary focuses on Hawaii, South Korea, Alaska and Japan. The US Army has been the forgotten service in force posture initiatives so far, but the AUSMIN communiqué tells us this is changing, referring to ‘enhanced land cooperation by conducting more complex and more integrated exercises and greater combined engagement with Allies and Partners in the region’. Working with the Australian Army and wider joint force on Australian training ranges and exercises areas will look uniquely roomy and valuable in comparison with the many limitations the US Army faces elsewhere.

Waiting for Washington to make all the decisions isn’t the right path and also not the way the Australia–US relationship works, so Australia needs to get ahead of slow processes and let the US know of the decisions and investments Canberra plans to make for joint ends.

There are signs Defence Minister Peter Dutton and the defence organisation may be thinking along these lines. In the press conference after the September AUSMIN meeting, he went further than the language of the formal joint statement, which read like a slow, careful extrapolation of what has been happening for years under the US force posture initiatives signed when Julia Gillard was prime minister.

In the AUSMIN press conference, Dutton talked about an expansion of air, maritime and broader force posture cooperation by saying, ‘[I]f that includes basing and includes the storage of different ordnances, I think that is in Australia’s best interest, our national interest, at this point in time.’ Given the history and politics of the US defence presence in Australia, this mention of basing is remarkable—and the low-key reaction to it back in Australia was perhaps even more remarkable. The result is an expansion in what’s possible, which probably means not US bases but joint Australia–US facilities. That’s a model that works well in the intelligence world; the joint facility at Pine Gap an example.

This is big news. Expansion of Australian facilities in the north and west for joint use by Australian and US forces—and potentially UK, Japanese and Indian forces through AUKUS and the Quad—would be a further practical step in resetting the military balance in the Indo-Pacific. Building facilities and industrial capacity to sustain nuclear submarines out of Stirling makes sense as part of such a package. So, the facilities aspects of the submarine cooperation are likely to be part of these ‘enhanced force posture’ arrangements, which will increase the ability for UK and US submarines to be operated and sustained in Australia—well before the first Australian nuclear submarine enters service.

It’s time for some high-vis vests and ribbon-cutting ceremonies to be a part of our near future, with open borders that allow our political leaders to turn up in Darwin and Perth. Biden’s global posture review can only bring results for Australian, US and Indo-Pacific security if there are active partners willing to invest to accelerate the review’s outcomes. Let’s demonstrate we understand enough about our own security needs to do so.

Michael Shoebridge is director of ASPI’s defence, strategy and national security program. He is on Twitter at @michael_ASPI.