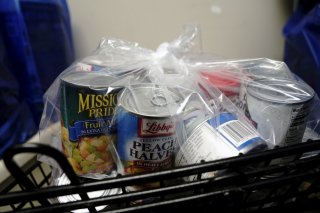 President Joe Biden has pledged to tackle hunger as part of his administration’s efforts to alleviate poverty.

“We cannot, will not let people go hungry,” Biden declared on his second full day in office, invoking the “values of our nation.”

One way his administration aims to accomplish this goal is by expanding the Supplemental Nutrition Assistance Program, the country’s largest anti-hunger program. I’m researching this program, long known as food stamps but today referred to as SNAP, for an upcoming book. The program helps struggling families while boosting the economy during downturns.

As Biden’s presidency gets underway, I’m watching to see not only whether the government expands the amount of aid this program provides people in need today, but whether there are lasting changes to SNAP and other anti-poverty policies that could reduce hunger in the future.

Unlike the Trump administration, Biden’s team is eager to find ways to maximize the use of SNAP to fight poverty during the pandemic and beyond.

Former President Donald Trump criticized the large number of people who remained on SNAP after the last recession, which occurred partly because poverty rates remained high even as unemployment went down. Believing that the program discouraged work, Trump repeatedly tried but failed to limit who could get SNAP.

After the COVID-19 pandemic hit, the number of people enrolled in SNAP soared again. Spending on the program surged even more because the government temporarily let all beneficiaries get the maximum amount of benefits.

Government aid through SNAP totaled a record US$85.6 billion in the 12 months that ended Sept. 30, 2020. That money helped feed around 44 million people, up from 35 million a year earlier.

But until recently there was no extra help for the roughly 40% of the people who were already getting the maximum benefits because of their very low incomes. Congress changed that when it approved a 15% increase for all SNAP recipients as part of the December 2020 $900 billion relief package. That benefits boost started the following month.

Despite SNAP’s expansion and additional aid flowing to food banks from government assistance and many high-profile donations to food banks and food pantries by some of the richest Americans, hunger has remained a problem throughout the pandemic.

By January 2021, a government survey found that some 11% of adults, and more than 1 in 7 of all U.S. households with children, said they were having trouble getting enough to eat – well above pre-pandemic levels. The problem is even worse for people of color.

Along with the 15% increase in SNAP benefits Congress approved in December 2020, which initially was to last for six months, were changes to make it easier for college students and those on unemployment benefits to get SNAP.

Biden wants to offer Americans who face economic hardship additional help. He has proposed extending the SNAP increase for at least another three months, through September 2021. Further, he has pledged to work with Congress to tie benefit increases to the health of the economy and the people so that Congress would not have to take action for extra help to kick in.

If Congress adopted such an approach, I believe vulnerable families would no longer be at the mercy of the kind of political squabbling that has delayed additional help during the pandemic.

Biden also signed an executive order directing federal agencies to try to do more for the poorest families through SNAP. In addition, his administration is trying to make it easier for states to send more help to families with children who are missing free or reduced-price meals at school or who are too young to attend.

The proposed SNAP changes are among many temporary benefit increases Biden and others have recently outlined, such as in unemployment benefits and new tax credits for families with children.

Columbia University researchers estimate that a combination of Biden’s proposals could reduce poverty in 2021 by almost 30% and halve the number of U.S. children living in poverty. If successful, this could launch a longer-term transformation in anti-poverty policies.

Many advocates of policies that help the poor have long argued that SNAP benefits are too stingy to provide enough nutritious food for an adequate diet.

On average, people on SNAP use over three-fourths of their benefits by the middle of the month – even in a strong economy. As a result, many SNAP recipients run out of benefits and regularly turn to food banks. In fact, more than 40% of food bank clients are enrolled in SNAP.

Technically, food stamp recipients are expected to spend 30% of their own income on food. If they have income, as most SNAP recipients do, their benefits are calculated by reducing the maximum benefit for their family size by 30% of the value of their income after deductions for things like child care. But many financially stressed families don’t feel they can afford to spend that much on food.

Another problem is how the maximum benefit is set. It is based on the cost of the Thrifty Food Plan, devised by the Department of Agriculture in 1975 as “a national standard for a nutritious diet at a minimal cost.”

Despite changes to reflect new official nutritional recommendations, the government has maintained the same inflation-adjusted cap on spending in place for decades. As a result, the plan relies on unreasonable and outdated assumptions that underestimate average meal costs, especially in areas with high food prices.

One of Biden’s executive orders instructs the USDA to carry out an until-now overlooked mandate that could fix this problem, potentially increasing the amount of SNAP benefits during good times and bad.

No changes are guaranteed

To be sure, it’s unclear what will happen with SNAP benefits.

Presidents have often used emergencies to make lasting policy changes, but big expansions in anti-poverty programs have historically been passed with large Democratic majorities in Congress as in the New Deal in the 1930s and the War on Poverty in the 1960s.

Today, the Senate is evenly split, with Democrats wielding control through Vice President Kamala Harris’ vote in that chamber. The Democratic majority in the House is also narrow.

Just as Trump failed at his efforts to cut many anti-poverty programs, Biden may not succeed in expanding them. But his proposed changes reflect a big shift in how the government uses policies to help Americans in need.