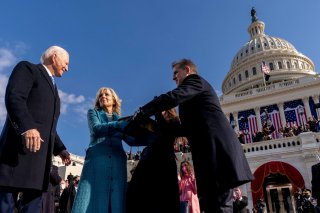 Joe Biden is now the 46th president of the United States. He was inaugurated under intense security following the attempted coup on Jan. 6, 2021, by Donald Trump supporters after the former president called for an insurrection against his own country’s government.

In his inauguration address, Biden made reference to the coup attempt and once again held up the U.S. as an example to the rest of the world:

“America secured liberty at home and stood once again as a beacon to the world. That is what we owe our forebears, one another, and generations to follow.”

World responses to the raid on the U.S. Capitol had taken a similar tone, including British Prime Minister Boris Johnson’s incredulous claim that the “United States stands for democracy around the world.”

But as Biden takes power and the U.S. Senate prepares to hold Trump’s second impeachment trial, it’s important to keep in mind that there was nothing unique about the attempted coup except that it happened at home. Both Republican and Democratic administrations have backed military coups around the world for decades, from Iran in 1953 to Bolivia in 2019.

One study counted 64 covert and six overt coups backed by the United States. Yet the erasing of the history of U.S.-backed coups allows the United States to forget its own acts in toppling other governments, retroactively washing itself clean.

Take George W. Bush, who is increasingly gaining some grudging respect since the end of his presidency. Bush spoke out clearly against the “mayhem unfolding at the seat of our nation’s government” on Jan. 6. “This is how election results are disputed in a banana republic — not our democratic republic,” he tweeted.

The dismissive reference to “banana republics” is more polite than Trump’s comments about “shithole countries” but it amounts to the same preaching of American exceptionalism and the same contempt for non-white non-Americas.

Take one of the original supposed “banana republics,” Guatemala. In the early 1950s, president Jacobo Arbenz Guzman, following the recommendations of the World Bank, began a campaign for economic independence that threatened the interests of the United Fruit Company, now Chiquita Brands International. The U.S. company’s highly profitable business in Guatemala was affected by the end of exploitative labour practices in the country.

The father of modern advertising, Edward Bernays, set about “engineering consent” for the false accusation that Arbenz was a communist. American officials then egged on Guatemalan army officers to overthrow Arbenz, which they did in 1954.

Military regimes continued for decades, inflicting violence upon Indigenous Peoples. Guatemala’s truth commission concluded that civil war had claimed 200,000 lives and that the army committed 93 per cent of all human rights violations.

This U.S.-backed coup wasn’t the first. In the wake of the Second World War, an American army occupation in South Korea throttled grassroots Korean democracy and imposed U.S. ally Syngman Rhee as president. Several coups followed until the arrival of lasting democracy in the 1980s.

South Korea’s truth commission found that tens of thousands of people had either been killed or suffered human rights violations, 82 per cent of them at the hands of the South Korean military.

Most famously, the U.S. helped topple Iran’s first democratic president, Mohammad Mossadegh, in 1953. When Mossadegh echoed the doctrine of governments like Canada that oil resources belonged to the people, he upset British and American oil companies. Their home governments then painted Mossadegh as a dangerous leftist.

U.S. media reports painted him as effeminate and weak. “He favoured pink pyjamas,” according to the New York Times. Time magazine called him the “weeping, fainting leader of a helpless country.” Kermit Roosevelt, a CIA operative in Iran, hired paid protesters, and Iran’s army soon toppled the government.

U.S. governments even approved coups against pro-American rulers. Ngo Dinh Diem’s tenure as president of South Vietnam ended unceremoniously in 1963 when President John F. Kennedy approved a plan for Vietnamese army officers to overthrow him. The U.S. would then work with a revolving door of military rulers in South Vietnam until 1973, when it withdrew its forces from the country.

President Lyndon Johnson encouraged a coup against Sukarno, Indonesia’s first president, by pro-western army officers. Sukarno was no democrat, but the United States was content with him until he took steps against western oil companies. Yet while trying to isolate his government, the U.S. government kept in contact with pro-western economists and the Indonesian army, as historian Bradley Simpson chronicles. The U.S. embassy aided the mass killing of as many as a million people in 1965-66.

America’s addiction to coups survived the end of the Cold War. The U.S. has backed coups in Haiti, Honduras and elsewhere. Most recently, the Trump administration cheered the toppling of Bolivia’s president Evo Morales in 2019 after the Organization of American States implied Morales was rigging votes.

Later investigations showed the claims were groundless. As has often been the case, U.S. corporate interests were at stake.

“We will coup whoever we want,” said Telsa founder Elon Musk, long interested in the country’s lithium, needed for electric car batteries.

Firstly, “American exceptionalism” insists that the U.S. is different from all other countries. In fact, it’s derivative. Trump’s forces followed a well-thumbed script. Consent must be manufactured, the enemy demonized — a pattern laid out in the 1950s by Bernays and Roosevelt. If necessary, crowds are mobilized in the pursuit of “regime change.”

Second, the method of the coup must be made acceptable via demonization and imagining coups as an acceptable way to transfer power. The American penchant for coups normalized this mindset long before Trump. Americans accept violence as simply another item in the political arsenal.

Finally, it helps to bring racism and sexism into play. Mossadegh was deemed weak and effeminate. Diem’s alleged weakness helped convince Kennedy that he had to go. It was easy to convince the American public to accept these faraway coups. Trump’s innovation was to convince millions of Americans that their fellow citizens, especially racialized Americans, were destroying the U.S. at home — and that a self-coup to remove that threat was perfectly acceptable.

“America is back,” says Joe Biden. The many victims of U.S.-backed coups might wish for America to stay home from time to time.