Biden's Tax Plan: Could It Work? 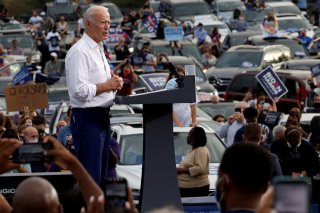 President Trump likes to say that Bidenomics, particularly its big proposed tax increases, will sink the economy and crash the stock market. A recent Trump tweet summed his forecast in one word: “Depression!”

Whatever the political effectiveness of such hyperbole, I think it really misses the point. Most economic modeling doesn’t support the president’s dire economic forecast, or anything close. Nor does Wall Street seem particularly frightened. As Politico’s Ben White writes, “Far from panicking at the prospect of a Biden win, Wall Street CEOs, traders and investment managers now mostly say they would be fine with a change in the White House that reduces the Trump noise, lowers the threat of further trade wars and ensures a continuation of the government spending they’ve seen in recent years.”

But avoiding economic disaster is kind of a low bar by which to judge any policy, especially these days. We need policies that promise to accelerate economic growth, both to ASAP dig ourselves out of the economic hole left by COVID-19 and to upgrade our longer-term growth rate. And that need should deeply inform Washington policymaking.

As AEI’s Kyle Pomerleau and Grant Seiter conclude in their analysis of the Biden tax plan:

Biden’s tax proposals would raise roughly $2.8 trillion between 2021 and 2030. His proposals would primarily raise taxes on high-income households and make the tax code more progressive. Biden’s proposals would raise effective tax rates on both individuals and businesses, resulting in lower output in the first decade. His plan would reduce debt-to-GDP in the second decade, leading to slightly higher GDP. However, in the long term, his plan would not raise enough to stabilize debt-to-GDP and would lead to a 0.18 percent smaller economy.

Some have looked at that forecasted GDP impact and concluded, “Hey, not so bad.” But when you need faster growth, “not so bad” isn’t going to cut it. We need pro-growth tax policy, not growth-neutral tax policy. But raising business taxes would be anti-growth tax policy — bad for investment, productivity, and worker wages.

Now Biden supporters argue that the growth driver in the Biden plan will come from trillions in new spending. But even if you are merely looking at the tax plan as a revenue generator and pay-for, wouldn’t it be better to also reform the tax code so that it taxes more efficiently and with a firm focus on pro-growth investment incentives? And it’s not just center-right economists who would like the Biden tax plan to do more to encourage investment. If Biden should become the next president, perhaps he’ll start listening to some of these pro-growth ideas.