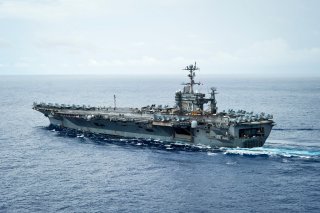 Here's What You Need to Remember: All of this pertains to a much-discussed phenomenon characterizing Navy carriers for quite some time - namely that longer-range anti-ship missiles, drone attacks, EW and laser threats from potential adversaries change the equation regarding where carriers may need to operate.

Streamlining the integration of these platforms, as stated by the Navy, could bring a range of substantial enhancements - and align with the Navy strategy to better prepare its carriers for war. The F-35C, naturally, will bring a new array of attack options for the Carrier Air Wing, not to mention an unprecedented measure of aerial Intelligence, Reconnaissance and Surveillance (ISR). Drawing upon new sensor and targeting technology, the aerial attack range will be significantly changed, and stealth technology will enable air attack to operate in higher threat environments, such as areas containing advanced air defenses. The arrival of the F-35C is, by all estimations, expected to change the paradigm for carrier-air attack.

These enhancements are intended to work alongside and benefit from the emergence of a first-of-its-kind drone refueler which brings the promise of potentially doubling the attack radius for carrier-launched fighters.

An ability to refuel while in flight massively extends a carrier's attempt to further project power, while remaining at safer stand-off distances. If the combat radius of an F-18 or F-35, on one fuel tank, reaches 300 to 400 miles or so, the aircraft will have to turn around at a certain distance from its carrier. However, if an attack platform can double that range, it can naturally travel much farther, enabling much more “dwell time” when it comes to attacks and provide the option to strike targets farther inland or from greater distances.