A Big Storm Might Knock Over This Expensive U.S. Navy Stealth Destroyer 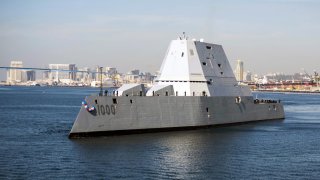 Key Point: The weight distribution makes all the difference.

When faced with high winds, up to 20-foot waves and dangerously rough seas -- which Navy ships can survive? … and continue to wage war on the open sea?

Such questions, often put to the test with new ships during “sea-trials,” were of particular relevance with the Zumwalt, as it is a first-in-class high-tech warship built with a sleek, more linear, stealthy hull. There have been persistent questions as to whether the ship might have stability problems in dangerous sea states, given that it does not have a standard “flare” shaped ship hull used by most destroyers and carriers. Rather, it has a thinner, sharper, smaller wave-piercing hull intended to increase stealth, maneuverability and speed.

The answer, according to the Commanding Officer of the USS Zumwalt Capt. Andrew Carlson, is that the ship has remarkable, if even somewhat surprising, stability.

“We took advantage of a Gulf of Alaska storm which reached Sea State 6 conditions. We were able to drive around in that at full power,” (Sea State 6: A world Meteorological Organization Standard specifying 13 - to 20 foot waves and rough seas). I had some hesitations and I knew the ship rode differently, but I would rather ride this ship in heavy seas,” Carlson said recently during a presentation at the Surface Navy Association Symposium, Arlington.

Carlson explained that, while the rough seas were as always nerve-racking, the ship seemed to “come back” from a roll caused by extremely rough seas. He said that during the heavy storm, “green water waves were coming up on the bow.”

Carlson, who said the Navy still has work to do assessing and preparing the ship for war, said “these sorts of lessons quiet the anxiety.”

The much-analyzed Tumberlome hull is engineered to slice through the waves with a smooth, stealthy, linear type of hull. It is designed to not only help the ship achieve greater speed and maneuverability, but also intended to increase the ship’s stealthy characteristics. A smaller mass beneath the water naturally reduces any kind of acoustic return signal to enemy sonar. While not likely to remain completely undetectable at certain ranges with certain kinds of sonar, the ships surface and undersea configuration is reported to massively change any kind of radar or sonar return signal -- potentially confusing potential adversaries as to the actual nature of the ship. At one point earlier in the ship’s development, Naval Sea Systems Command reported that the USS Zumwalt appeared as a “small fishing boat” to enemy radar.

There may be some interesting reasons why the Zumwalt can perform well in rough seas, based upon an analysis of the topic in an essay by author Christopher Bassler from the Seakeeping Division, Naval Surface Warfare Center, Carderock Division.

The paper, called “Dynamic Stability of Flared and Tumblehome Hull Forms in Waves,” specifically takes up a precise comparison between Tumblehome hulls and what it calls Flared (more common/traditional) hulls.

According to a preliminary series of tests outlined in the paper, the Tumblehome hull did experience a greater capsize rate in some sea states, particularly in extremely high seas such as Sea State 8 (30-to-46 ft waves). However, the study says the Tumblehome hull can reduce its number of capsizes by extending or elongating its “centre of gravity” -- the area of centered, balanced weight distribution.

“From the random seas investigation, a significant difference was observed for the capsize rate of the flared and tumblehome topside geometries. To achieve a similar, reduced number capsizes the GM (KG-Centre of Gravity) of the tumblehome topside must be increased by 1- 1.5m,” the essay writes.

The ship appears to have been engineered with a centralized or carefully distributed “centre of gravity” to minimize the chance of capsizing. A ship’s Centre of Gravity is defined as “the point where the total weight force of the ship is considered to act vertically downwards.” More generally, a ship’s centre of gravity is the point at which the entire weight of the ship is concentrated such that -- if supported at that point -- the body remains in equilibrium.

It does seem to make sense that a broader area of evenly distributed weight might increase the stability of a ship in rough seas. A longer centre of gravity might make a ship less top-heavy and therefore less likely to capsize. While all ships likely adjust their weight distribution by placing cargo or heavy assets in certain places, it may be that a longer area of evenly distributed weight makes a particular difference with a Tumblehome hull verses a Flared hull.

A simple observation of various ships, for instance, might shed some light on the issue. A carrier, for instance, has a flared hull. As one can clearly see, its island is off to the side of the deck, and it does appear as though it might be engineered differently than an Zumwalt; with the Zumwalt, the large structure, or rising portion of the ship does appear to be centered - evenly distributed and directly above the center of the ship. Wth carriers, by contrast, the topside weight distribution seems quite different, as it may not have the same rough-sea vulnerability as a Zumwalt given its size and overall weight distribution. .;

Nonetheless, regardless of the particular hydrodynamic factors which contribute to its stability, ship commanders, scientists and Navy experts seem to be of the view that the Zumwalt is beginning to demonstrate an effective - and potentially somewhat surprising -- stability in rough seas. Carlson said the Zumwalt’s rough-seas performance may impact future Navy ship designs.

“If we get the timing right, this can inform the next ship buys to make sure we are making the right trade off,” Carlson said.