Bismarck vs. Iowa: What If the Two Baddest Battleships Fought? 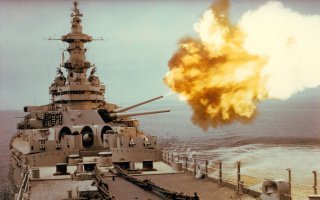 Here’s What You Need to Remember: Despite the Bismarck’s well-trained crew, good design and powerful weapons, Iowa-class ships had one technological innovation the German battlewagon didn’t: radar-directed main guns.

Despite the vast scope of World War II, the navies of the United States and Nazi Germany fought few, if any, direct surface engagements. By the time of America’s entry into the war the Royal Navy had already sunk or neutralized the lion’s share of Hitler’s Kriegsmarine, with only Hitler’s U-boats remaining a substantial German threat.

The Bismarck-class battleships were the largest surface ships built by Germany before and during World War II. Germany had been prohibited by the Treaty of Versailles to build warships over 10,000 tons, but the Anglo-German Naval Treaty of 1935 implicitly allowed them—though the German Navy was not to exceed 35 percent the size of the Royal Navy.

The Bismarck class had eight fifteen-inch guns, each capable of hurling an armor-piercing, capped round up to 21.75 miles. The 1,764-pound killer shell traveled at 2,960 feet per second out the bore, faster than the bullet of a high-powered rifle. At 11 miles, it could penetrate 16.5 inches of armor, or roughly to the horizon at sea level, although it could theoretically hit targets much further.

Both battleships were heavily protected, with 12.5 inches of steel at the main belt, 8.7-inch armored bulkheads, and 14.1 inches of armor on the main gun turrets. The eight guns were installed in four turrets of two guns each. This spread the battleship’s main armament out among more protected turrets, increasing their survivability in a gunfight.

Iowa had nine sixteen-inch guns. Each Mark 7 gun could launch a 2,700-pound armor-piercing shell 11.36 miles to penetrate 20 inches of steel plate—and even farther to a lesser penetration. In addition to search radar, the Iowa-class ships had Mk 13 fire control radars, allowing them to engage targets at extreme ranges and at night. The Mk 13 had a theoretical range out to 45 miles, and could even spot where the errant rounds landed, making aiming corrections much easier.

The Iowa-class ships were also heavily armored, with 12.1 inches at the main belt, 11.3-inch bulkheads, and an amazing 19.7 inches of armor on the main turrets. The ship’s vital combat information center and ammunition magazines were buried deep in their armored hulls.

The larger context of the battle—the U.S. Navy being forced to take on the German Navy—would have had serious repercussions for the Pacific theater. Germany was, after all, considered the primary threat, with Japan second and Italy third. A more powerful German Navy (or weaker Royal Navy) would have had second-order consequences for the Pacific, delaying the Solomons campaign, including the invasion of Guadalcanal, the Battle of the Coral Sea, and even the Battle of Midway.