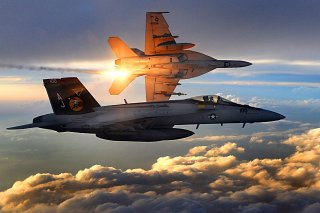 Related: THE NAVY’S PLAN TO REPLACE THE SUPER HORNET BY THE 2030S

One of the most pressing issues facing the U.S. Navy in the 21st century is the lack of fuel range in its carrier-based fighters. Neither the existing Block II Super Hornet nor the advanced F-35C Joint Strike Fighter have the range they’d need to engage Chinese targets without placing their carriers in direct range of China’s hypersonic anti-ship missiles. As such, a slew of efforts are underway to pull more range out of these aircraft, including the development of the MQ-25 Stingray refueling drone for use on America’s flattops.

Related: MQ-25 STINGRAY: A NEW DRONE THAT COULD BE A GAME CHANGER

But in order to address this problem on the aircraft itself, the Block III Super Hornet includes the addition of conformal fuel tanks that add 3,500 pounds of fuel. These additional tanks are called “conformal” because they hug the fuselage of the fighter, limiting added drag. While this won’t be enough to offset the capability gap created by China’s anti-ship missiles, it is an important step in the right direction.

Related: WHY THE NAVY NEVER PUT THE F-22 ON AIRCRAFT CARRIERS