Blood For Oil: These Five Military Catastrophes Were Caused By Fossil Fuels 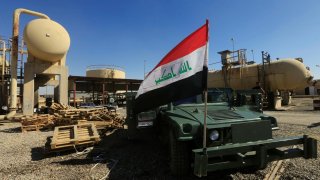 Here's What You Need To Remember: Even success on the battlefield does not necessarily mean a successful policy.

Michael Peck is a contributing writer for the National Interest. He can be found on Twitter and Facebook.This article is being republished due to reader interest.

Image: An Iraqi flag is seen on a military vehicle at an oil field in Dibis area on the outskirts of Kirkuk, Iraq October 17, 2017. REUTERS/Alaa Al-Marjani