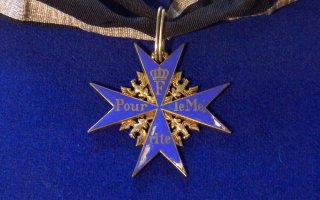 Here's What You Need to Know: Novelist Ernst Jünger was the last living holder of the Pour le Mérite at the time of his death in 1998.

While the name is in French rather than German, the “Blue Max” is an award that has become nearly legendary. The origins date back to 1667 when the German state of Brandenburg introduced the Order of Generosity or Ordre de la Génerosite. The name was in French as it was the common language of many German courts of the day. This award was later renamed the Pour Le Mérite (For Merit) by Prussian King Friedrich the Great in 1740 and was issued to loyal subjects for meritorious service in the pending war over the lands of Silesia. More commonly known today as the “Blue Max”—in no small part due to the book and film of the same name—this is among the most famous Imperial German decorations.

It was Prussia’s highest military award and was in fact given not for individual acts, but rather for repeated and continual gallantry—hence it was often awarded to pilots during World War I. This award should not be confused with its civilian counterpart, which is still awarded to this day. Likewise, while it was a Prussian award but when the King of Prussia became the German Kaiser after the unification of Germany in 1871 it was awarded to all German soldiers. A total of 1,687 were awarded during World War I. A higher-level award, usually given to recipients of high rank, featured golden oakleaves mounted on a suspension ring. This version was issued 122 times.

Furthermore, unlike the American Medal of Honor or England’s Victoria Cross, the recipient of the award needed to be among the living and the Pour Le Mérite was not awarded posthumously. Sadly, during World War I many German soldiers died while the paperwork for their awards was being considered. It should also be mentioned that unlike many other medals soldiers in the field wore this one on their uniform.

A civil class of the award was created in 1842 by King Frederick William IV of Prussia as the Order Pour le Mérite for Sciences and Arts (Orden Pour le Mérite für Wissenschaften und Künste). It included three sections for the humanities, natural science and the fine arts.

Otto Von Bismarck was among only three individuals to have won both the military and civilian versions of the award. The Nazis deprived several notable Jews of obtaining this award, and sadly Albert Einstein was forced to give up his award in 1933. In 1952, the president of West Germany, Theodor Heuss, revived the civil order, which is still awarded to this day.

Today the Pour Le Mérite is a highly rare medal, and even very few advanced collectors of German medals have one in their collections. Originals range in price from $15,000 to $20,000 today, and while the award was not formally issued after 1918 it was produced in limited numbers following World War I. Three different firms were charged with producing the award from 1914 through 1918 and the same dyes were used in the 1920s explains Stephen Previtera, author of Prussian Blue: A History of the Order Pour le Mérite. “These were created for World War I veterans who had not received their award.”

Likewise, many of the ones encountered for sale today are reproductions, with the best ones dating from the 1960s and 1970s. And while these can still fetch rather high prices, often above $100, these Previtera says “lack the same attributes found in authentic pieces.”

*Among the most famous recipients was Manfred von Richthofen, also known as “The Red Baron.” But it was not uncommon for officers of high rank to win the Pour Le Mérite, and recipients included such colorful characters as Chancellor Otto Von Bismarck, as well as Field Marshals Paul von Hindenburg and Erich Ludendorff, along with Admirals Reinhard Scheer and Alfred von Tirpitz.

*Other recipients during World War I include further Nazi Reichsmarchall and Luftwaffe head Hermann Göring, and of course “The Desert Fox” Erwin Rommel.

*Peter III of Russian was one of only a handful of non-Germans to win the Pour Le Mérite, which he did for making peace with Prussia in 1762 after succeeding to the Russian imperial throne.

Novelist Ernst Jünger was the last living holder of the Pour le Mérite at the time of his death in 1998.

* The award’s design features a blue-enameled Maltese Cross with eagles between the arms, the Prussian royal cipher, and the French legend Pour le Mérite (for merit) arranged on the arms of the cross.

* Recipients of the Blue Max were required to wear the award whenever in uniform.

* The Order died with the end of Imperial Germany and Kaiser William II's abdication as King of Prussia on Nov 9., 1918, and was never awarded again to a new member.