Body Armor That Can Stop .50 Caliber Bullets? Look No Further. 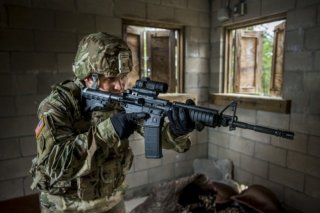 Here's What You Need to Remember: The end of the Vietnam War led to a stagnation in body armor technology for aircrew. But by the 1990s, technology had advanced again.

This level of protection was not enough for helicopter crewmen during the Vietnam War, who began the war wearing vests of WWII and Korean War vintage. New vests were needed for helicopter crewmen, who often were faced with machine-gun fire from various 7.62x39 and 7.62x54R (.30 caliber) weapons on the ground.

A development program was initiated in the 1960s, taking advantage of the new ceramic armor materials to develop .30 caliber-resistant body armor for helicopter aircrew. The solution was found in a curved ceramic plate made of various composites that could withstand .30 caliber hits. Early versions rested the plate on the pilot's legs or on the seat itself, but eventually, a fabric “vest” type carrier was made that held the plates on the pilot’s chest for optimal usability and comfort.

While .50 caliber-resistant body armor exists, it’s impractical for your average infantryman with current technology. For an infantryman, rapid movement under fire can often mean the difference between life and death, and a pair of .50 caliber resistant plates would weigh 22 pounds alone, weighing down a soldier an unacceptable amount.