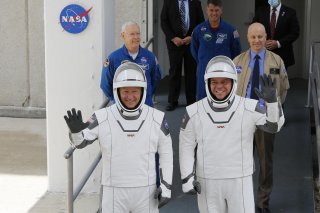 Tech billionaire Elon Musk is preparing to blast American astronauts into orbit Wednesday as his rocket company gains an edge over aerospace behemoth Boeing in the quest to become the first to end the government’s decades-long monopolization on space travel.

SpaceX, a relative youngster in the aerospace industry, will launch a crew of two men to the International Space Station from NASA’s Kennedy Space Center in Florida, according to Reuters. The launch is coming after years of sniping back and forth between Boeing executives and SpaceX hierarchy, including Musk, who believed the company is too complacent to pull off the feat.

If SpaceX’s move is successful, then it will effectively usher in a new era in which the government cedes space travel to private companies.

SpaceX was first considered a long shot to score contracts for the Commercial Crew Program. Boeing received more than 60% of the $6.8 billion in contracts NASA awarded in 2014, pulling in $4.2 billion to SpaceX’s $2.6 billion, The Washington Post reported in a story published May 21.

“One industry veteran told me, ‘You know their rockets are put together with rubber bands and sealing wax,’” Lori Garver, a former deputy NASA administrator who has long advocated for the program to outsource travel to the private sector, told WaPo. “‘It’s not real. It won’t fly.’”

Boeing dismisses any suggestions that there is animosity between the two companies. Company spokesman Bradley Akubuiro directed the Daily Caller News Foundation to a LinkedIn statement from Leanne Caret, president & CEO of Boeing Defense, Space & Security in which she wished SpaceX and the astronauts good luck as they seek to enter Earth’s orbit.

Despite the public face, Boeing executives “can’t accept” SpaceX is flying people first, WaPo reported, citing an industry official who spoke on the condition of anonymity because they are not authorized to speak publicly.

“People are annoyed by Elon — how does this guy who smokes pot beat us?” the official reportedly said. “We have a lot of humble pie to eat here.”

The person was referring to a moment when Musk smoked a marijuana cigarette with comedian Joe Rogan in 2018 while attempting to explain why he sometimes gets caught in Twitter battles with his critics. He discussed everything from his social media behavior to concerns about artificial intelligence on “The Joe Rogan Experience,” a podcast that livestreams on YouTube.

“Rich guys, they love rocket ships,” Trump said during a 2018 press conference flanked by a model of NASA’s Space Launch System. Having wealthy tycoons like Richard Branson and Jeff Bezos invest in space travel is “better than us paying for them,” the president added. Bezos owns Blue Origin, a space exploration company.

“I noticed the prices of the last one, they say it cost $80 million. If the government did it, the same thing would have cost probably 40 or 50 times that amount of money,” Trump said during the conference.

The DCNF reached out to Musk through his electric vehicle company, Tesla, but the company has not responded to a request for comment.