Border Control Wanted To Send This Uyghur Woman Back To China. A Business Card May Have Saved Her Life. 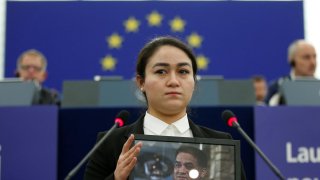 At 3 in the morning Feb. 2, 2013, Ilham Tohti and his daughter left their home in Beijing for that city’s Capital International Airport.

They were headed for America, with Indiana University as their final destination. The school had invited Tohti to become a visiting scholar.

Their flight wasn’t scheduled to depart until 10 a.m., but Tohti thought that if he and his daughter left in the middle of the night, authorities were less likely to follow them.

Tohti, an Uighur Muslim, was an economics professor at Beijing’s Minzu University and known for his work on Uighur relations with China’s Han majority. The Uighurs are a predominantly Turkic-speaking Muslim minority group in China’s northwest region of Xinjiang.

Although he knew that China’s communist government was watching him, Tohti thought he could make it safely to Indiana University with his daughter, Jewher Ilham. When they left for the airport, he had all of the required legal documents.

But the authorities who inspected their passports stopped the professor and his daughter. Security agents pulled them aside.

“I appeared to be no threat to the government,” Ilham told The Daily Signal in a phone interview. “So they said, ‘If you want to go, you can go.’”

At 18, Ilham was unprepared to make the trip alone. But her father didn’t give her a choice.

“My father forced me to leave,” she recalled.

An Ally in America

Over 6,500 miles later, Ilham landed in Chicago, knowing not a single American and speaking hardly any English.

But she could understand enough to gather that U.S. Customs and Border Protection agents were trying to send her back. Finally, they gave her the opportunity to call someone. She pulled out her Nokia cellphone, only to realize that, in a foreign country, it didn’t work.

In a pocket next to her phone, Ilham found a business card. The front was printed in English, the back in Chinese. On it was the name of Elliot Sperling, former director of the Central Eurasian studies department at Indiana University in Bloomington and the person who had offered her father the post as a visiting professor.

“My father put that in my pocket before I left,” Ilham said of the business card. “I didn’t know who that name card belonged to, and that happened to be the professor who invited my father.”

Sperling, who would die in 2017 at 66 from a heart attack, had pulled some strings and made Ilham’s entrance to the U.S. possible.

“I was stuck in the Chicago airport,” Ilham recalled. “I was not allowed to get in because my visa status only allows me to get into the U.S. when my father is present. But my father was obviously not allowed to come with me.”

Ilham later learned that during the flight of over 14 hours, her father called Sperling to let him know that his daughter was on her way. Alone.

Sperling, she said, “was waiting for me or somebody to get in touch with him.”

Ilham wasn’t surprised that her father had a backup plan before they even left China. “He always considers the consequences, and he always plans ahead,” she said.

Prior to the trip that they interrupted, Chinese authorities had placed Tohti under house arrest multiple times. Beijing depicted his work as promoting separatism.

After the 9/11 attacks on America, China’s communist regime increasingly viewed the Uighur population as a separatist, terrorist, and extremist threat.

The Chinese government had linked some incidents of terror to the Uighur minority, and began to use those few incidents to justify widescale religious persecution and, eventually, a cultural genocide.

Supporters of Tohti’s work describe his positions as moderate and regard him as a symbol of peaceful resistance.

But in 2014, the Chinese government sentenced him to life in prison on charges of separatism.

At the time, a spokesman for the U.S. Embassy in Beijing said that Tohti “consistently supported human rights for China’s ethnic Uighur citizens,” adding:

His arrest silenced an important Uighur voice that peacefully promoted harmony and understanding among China’s ethnic groups, particularly Uighurs. We stress the importance of Chinese authorities differentiating between peaceful dissent and violent extremism.

Ilham said that when Chinese authorities arrested, convicted, and sentenced her father, they sent chills through the Uighur population—and the world.

“If somebody who has a peaceful voice can be arrested, then there’s no hope for everyone else,” she said.

Today, Ilham is 26 years old. Unable to return home, she’s spent the past seven years establishing a new life in the U.S. Sperling, she said, became like a father to her.

Her real family hasn’t seen or heard from Tohti since 2017, when authorities stopped allowing visits.

A recent graduate of Indiana University with a degree in political science and Near Eastern studies, Ilham began using her freedoms to be a voice for the estimated 1 million Uighurs who aren’t allowed one.

Her inbox, she said, is full of messages from strangers asking whether they, too, should speak out about the abuses their Uighur family members are facing.

“I told them I really don’t know,” Ilham said, adding:

In 2015, Ilham published a book telling her story, titled “Jewher Ilham: A Uyghur’s Fight to Free Her Father.” She plans to pursue a master’s degree in foreign policy. In the meantime, she is writing a second book while trying to raise funds for a documentary she is helping to produce about the Uighurs’ plight.

Despite Ilham’s advocacy, things have gotten exponentially worse for China’s Muslim minority since she arrived in the U.S.

The Trump administration, for its part, has confronted the abuses head-on, taking actions that include economic sanctions on China and sanctions on individual Communist Party officials.

The United States will not stand idly by as the Chinese Communist Party carries out human rights abuses targeting Uighurs, ethnic Kazakhs, and members of other minority groups in Xinjiang, to include forced labor, arbitrary mass detention, and forced population control, and attempts to erase their culture and Muslim faith.

Some of those firms had documented relationships with American companies.

Ilham said she is pleased with the U.S. response, calling the Trump administration’s actions “bold.” She said she hopes these sanctions will remain in place until the abuses end.

“I’m not asking to create a problem,” she stressed, wanting to avoid advocating escalated tensions between the U.S. and China. “I’m asking to solve a problem.”

When asked whether her father would be proud of her advocacy work, Ilham deflected.

“I don’t even need him to be proud of me,” she said, with what sounded like desperation in her voice. “As long as he can be released or be free, I don’t even mind.”

At the time of her interview with The Daily Signal, Ilham had just turned 26.

“I just want to have a normal life just like everyone else,” she said.

But unable to return to China, call her father, or find out information about his health, this is her new normal.

“I want to receive a happy birthday from my dad,” she said.

Knowing that might never happen, she added: “I even miss fighting with him.”

This article by Kelsey Bolar, @kelseybolar, and Leave a comment first appeared in The Daily Signal on July 27, 2020.