Bored at Work? Try Disarming Nuclear Weapons For a Living 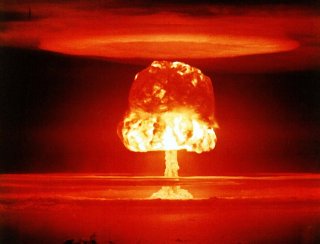 Here's What You Need To Remember: Early American nuclear weapons — experimental or operational— kept their fissile cores separate from their bomb casings for safety and custodial reasons. Special hatches in bomb casings allowed technicians and crew to load and unload the cores.

In the spring of 1952, the U.S. government tested tactical nuclear weapons at the Nevada Proving Ground as part of Operation Tumbler-Snapper. It was the third nuke test series in 18 months at the Nevada site in an era of breakneck atomic development.

Early American nuclear weapons — experimental or operational— kept their fissile cores separate from their bomb casings for safety and custodial reasons. Special hatches in bomb casings allowed technicians and crew to load and unload the cores.

Twelve days later on May 25, 1952, Clark watched Shot Fox detonate — flawlessly, this time. The troops huddled in their trenches, the instruments recorded their data and the psychologists observed their subjects.

This article was published last year.