The BR4 Trooper Rifle: Why Police Love It 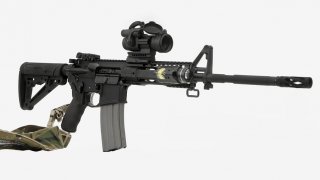 Here's What You Need To Remember: In the context of the mass-procurement market, the Trooper is less of a concrete product and more of a template to be customized to the specific tactical needs of agencies and security providers. In a further nod to their law enforcement customers, BCR includes armorer and maintenance training services in the final contract price.

U.S. police departments didn’t issue guns until the end of the 19th century. Officers came into the job with their own personal firearms, which inevitably resulted in a hodgepodge of revolvers, pistols, and rifles across a great swathe of calibers.

The standardization efforts of the following decades-- beginning with the NYPD’s widespread adoption of the Colt New Police Revolver under Commissioner Theodore Roosevelt-- fostered efficiency and cost-effectiveness, but also led to the rise of a new, booming law enforcement procurement market. One of the newer players in the law enforcement space is Battle Rifle Company (BRC), a Texas-based firearms manufacturer that has made a name for itself with a series of AR-style rifles designed for tactical use.

BRC’s flagship line is the BR4 platform, a collection of 10 rifles optimized for specific use-cases. To give a few examples, the BR4 Attache is a compact ATF-compliant pistol that excels in VIP protection roles; meanwhile, the BR4 Cutlass is designed for purpose-built for maritime security use.

Unsurprisingly, BRC’s most popular product is its baseline, general-purpose AR rifle variant: the BR4 Trooper. Described by BRC as “a basic entry-level rifle with full Milspec features” with an MSRP of $995,  the Trooper is marketed at law enforcement agencies interested in bulk-purchasing an affordably priced batch of AR-style rifles that offer standardized and reliable out-of-the-box performance.

These baseline features are fairly standard for the Trooper’s price segment, but BRC has made clear that they are happy to accommodate a wide range of customizations to elevate the Trooper beyond mil-spec standards. The Trooper is offered with a polished, custom-adjusted 4-6 pound trigger that promises “smoother operation,” different calibers including 9mm and 300 Blackout, different-sized handguards to make room for optics such as flashlights or red-dot sights, and an expansive selection of aftermarket rear sights suited to a client’s unique performance needs. Depending on which of the two-barrel sizes the customer opts for, the Trooper also features several different styles of flash suppressors.

In the context of the mass-procurement market, the Trooper is less of a concrete product and more of a template to be customized to the specific tactical needs of agencies and security providers. In a further nod to their law enforcement customers, BCR includes armorer and maintenance training services in the final contract price.

With the BR4 Trooper, BCR has carved out a place in a saturated tactical market by offering a robust ecosystem of customizability and customer service on top of an affordable mil-spec foundation. Clients with more exacting performance needs may be interested in the pricier options in BCR’s catalog, such as the BR4 Odin with BCR’s premium HEXRail free-floating rail system, or one of the many specialized BR4 variants. Nevertheless, the Trooper remains a formidable option for agencies seeking an affordable, built-to-order AR-style platform for their officers.

Mark Episkopos is a frequent contributor to The National Interest and serves as a research assistant at the Center for the National Interest. Mark is also a PhD student in History at American University. This article first appeared last year.