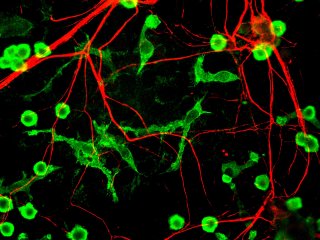 We know that the body’s immune system is important for keeping everything in check and protecting us. But a lot of us don’t realise that the brain also has an immune system.

Microglia, which are the brain’s immune system cells, are involved in everything – from brain development to protecting against diseases such as meningitis and Alzheimer’s. But for all the good these cells do for us, under the wrong conditions they can also cause us harm.

Microglia belong to a group of non-neuronal cells called glia, which originally were thought to play a supportive role for the brain’s neurons. Now research shows that microglia actually do much more than only support the neurons: they nourish, protect and sometimes even destroy them.

These cells are unique because they come from the same place as other immune system cells, but have a different origin from other brain cells, which develop from neural stem cells. Microglia come from the yolk sac – an extra embryonic membrane – and travel to the brain early during its development.

Once established, microglia perform numerous functions. They help neurons connect, clean the brain of waste and dead or injured cells, constantly check everything is in order, and defend the brain from external threats (such as microbes), and internal threats including misfolded proteins (when a protein takes on the wrong form, which can cause disease). Their ability to change physical form and behaviour in response to their environment allows them to perform these many roles.

Microglial functions are especially crucial during brain development, when they help young neurons grow, and ensure the right connections are made between neurons. Through a procedure called pruning, microglia eat connections between neurons, maintaining strong ones while eliminating weaker or unnecessary ones. This continues somewhat during adulthood. For example, microglia remove unimportant memories by eating or altering synapses involved in their maintenance.

Faulty pruning during brain development has been linked with disorders such as schizophrenia and autism. But uncontrollable pruning by microglia in adulthood has been implicated in developing diseases such as Alzheimer’s.

Microglia have specific receptors on their surface which recognise distress signals from other cells. These signals attract microglia to the site of the problem. When the brain’s balance is disturbed (usually as a result of inflammation), living neurons can become stressed and produce these signals. This may cause them to be eaten alive by microglia. As neurons are killed, the connections they have with other neurons are also eliminated, which can cause severe issues in brain connectivity and functions.

Inflammation in the brain can be caused by stress, pathogens, and auto-immune conditions, and is also connected to inflammation in other parts of the body. Brain inflammation is common in neurodegenerative diseases, as well as mental health disorders, including depression.

Inflammation causes microglia to change roles, and turn into their aggressive form to defend the brain. Usually, when stress signals stop and anti-inflammatory signals are received, microglia go back to first repairing, then protecting the brain.

But there are cases, such as with chronic stress, ageing and neurodegenerative disorders, where microglia can become more aggressive and less easy to regulate, making them more dangerous for the brain. In these cases, microglia can increase in numbers, unnecessarily kill nearby cells, and may contribute to making the brain even more inflamed by secreting inflammatory molecules. They also don’t go back to their protective role easily.

Look after your brain

But there are many things we can do to keep our microglia happy – and our brains healthy – such as:

Maintain a healthy diet: Compounds found in fruits, vegetables, and healthy fats, can keep your microglia young, and shift them towards an anti-inflammatory form.

Keep your gut bacteria happy: The brain and the gut are connected by the vagus nerve, so microbes living in our gut have a large effect on the brain. These microorganisms are involved in the development, maintenance, and overall health of microglia.

Avoid alcohol and smoking: Alcohol causes brain damage. A recent study found that one of the ways it does so is by activating the microglia’s inflammatory response. Research shows this activation is also induced by a specific compound found in cigarette smoke.

Sleep: Microglia never sleep, but they clean and repair the brain and improve memory while you do. Lack of sleep, however, has also been shown to make microglia take on their inflammatory form.

Take care of your mental health: Microglia can sense stress, and they respond to it by turning into their inflammatory form. This form is present in numerous neuropsychiatric disorders, and also in some cases mental health issues (such as depression) that precede neurodegenerative disorders.

Exercise: A recent review found exercise directly affects microglia, and shifts them towards having a protective form. Exercising the brain has also been shown to train microglia to resist Alzheimer’s disease.

Although we know some things about microglia, we don’t know everything. We know some things about how they form, that they’re involved in many diseases, and that they might essentially control the brain. But we also know we can’t control them. Future research might focus on how we can stop microglia from causing diseases, and how to stop these cells from turning against the brain.

Eleftheria Kodosaki is an Academic Associate at Cardiff Metropolitan University.