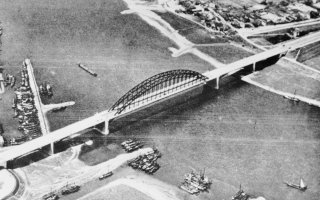 Here's What You Need to Know: The operation will always be a great "what-if" of history.

On the afternoon of September 17, 1944, the death blow to Hitler’s Germany seemed to blossom in the skies over Holland.

It was 75 years ago when two American and one British airborne division landed in a carpet of parachutes that stretched 60 miles from Eindhoven in southern Holland north to Arnhem on the Rhine River. Instead of the chaos that afflicted the early night airborne landings in Sicily and Normandy, the landings on that warm Sunday went remarkably smoothly, with the troops landing on their drop zones smoothly with light losses.

It was an auspicious beginning to what the Allies hoped would be the beginning of the end of the Third Reich. Just three months ago, the American, British and Canadian armies had been stuck in Normandy, penned in by hedgerows and panzer divisions. But in August, the Germans had broken apart and the Allies had broken out, in an advance that took them 500 miles into Germany itself. The once-invincible Wehrmacht, already being hammered in the East by the Soviet juggernaut, seemed to be falling apart.

But guarding Western Germany like a moat was the mighty Rhine River. Once sheltered behind it, the battered German columns fleeing France could rest and regroup. But what if the Allies could bounce the Rhine in one quick, audacious advance? Once across the waterway, they could race across the North German plain to seize the industrial heartland of the Ruhr – and then on to Berlin. Perhaps the war in Europe would end by Christmas!

The problem was how to quickly cross the numerous rivers and canals that crisscross the Netherlands, This was where the 35,000 paratroopers of the First Allied Airborne Army came in: they would swoop down to seize several bridges across the Netherlands, creating an corridor that would let the tanks race the Dutch polder (land protected from the water by dykes) until they reached the British 1st Airborne Division securing the bridge across the Nederrijn at Arnhem.

Yet just eight days later, the last exhausted survivors of the 1st Airborne Division – that had triumphantly seized the bridge across the Rhine at Arnhem -- paddled back across the river. Instead of a highway to the Reich, the Allies had achieved a 60-mile corridor to nowhere.

Operation Market-Garden will always be a great what-if. Had it succeeded, it would have gone down as one of the most brilliant audacious operations in history. But it didn’t succeed, and the reasons why still matter today.

Here are some lessons of an operation that was “a bridge too far:”

Buoyed by their sizzling advance across France and Belgium, the Allies were so confident of German collapse in autumn 1944 that they became complacent. Market-Garden was essentially a British operation. And if anyone should have known better, it was the British, who had painfully learned how skillful the Germans were at improving during a crisis. There was no excuse for assuming that the Wehrmacht would not find the resources and willpower to resist a 60-mile thrust into their lines. The same wishful thinking can be seen in U.S. assessments that there was “light at the end of the tunnel” in Vietnam just before Tet Offensive, or the assumption that capturing Baghdad in 2003 would mean the end of the Iraq War.

The same planners who meticulously worked out every detail of D-Day – the largest amphibious invasion in history – failed to consider basic details such as coordinating ground and air operations. British commander disregarded aerial reconnaissance and Dutch Resistance reports that two SS panzer divisions that had sent spotted near Arnhem. The 1st Airborne seized the Arnhem bridge, but couldn’t receive reinforcements, supplies or even air support because their radios had been sent to the wrong frequencies. Then again, the U.S. Army and Marines couldn’t communicate with the Navy and Air Force during the 1982 invasion of Grenada.

What can go wrong, will go wrong:

When the 19th Century German military thinker Carl von Clausewitz spoke of the inevitable “friction of war,” he must have had a clairvoyant vision of Market-Garden. As soon as the operation began, it began to unravel. The paratroopers mostly secured their objectives on the first day, but shortages of transport aircraft and bad weather hindered aerial reinforcement and resupply. The Germans recovered the complete Market-Garden plan from the body of a dead Allied officer. The British armored advance was confined to a single road (“Hell’s Highway”) on a narrow causeway above flooded terrain continually blocked by German counterattacks. Napoleon Bonaparte, who might have won at Waterloo had it not rained, would have sympathized.

America and Britain fielded different armies in World War II. The Americans were more willing to take risks. But short of manpower after five years of war, and scarred by the slaughter of an entire generation in the First World War, the British tended to favor methodical offensives designed to minimize casualties. Though Operation Market-Garden relied on a rapid ground advance to relieve the lightly armed paratroopers at Arnhem, the British armored columns were criticized for moving too cautiously. It would be 20 years later, in Vietnam, when it would be the American military’s turn to fight a war it was unsuited for.

Don’t bite off more than you can chew:

“I think we may be going a bridge too far,” one British commander is reported to have said about the plan for Market-Garden. Relying on paratroopers to seize multiple bridges across a 60-mile corridor would have been an ambitious endeavor under the best of conditions. However, Hitler also took too big a bite when he tried to conquer Russia. He paid the price.

Image: An aerial view of the bridge across the Waal River at Nijmegen, September 1944 / Wikimedia Commons