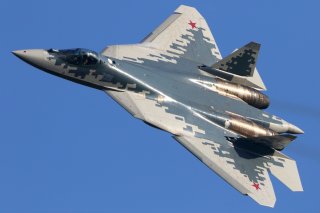 On Monday, the British Ministry of Defence suggested that Russia’s Su-57 Felon, the country’s first stealth fighter, has been involved in combat operations related to Russia’s ongoing invasion of Ukraine. While this is far from the first time reports of the Su-57’s involvement in Ukraine have surfaced, all previous reports have come from Russian-owned state media outlets.

According to the intelligence update posted to Twitter, the British Ministry of Defence believes it’s likely the Su-57 has been participating in Ukraine operations since the summer.

The evidence offered by the U.K. to substantiate the Su-57’s involvement in Ukraine appears awfully thin, as it seems largely based on the presence of these aircraft at Russia’s Akhtubinsk Air Base, where Su-57s are already known to operate from. But, however, it is likely that the ministry has intelligence sources it won’t publicly disclose. In other words, while the evidence presented is easy to poke holes in, it may be worth giving the U.K.’s statements the benefit of the doubt.

What does the UK say about the Su-57 in Ukraine? According to the British Ministry of Defence’s posts on Twitter, five Su-57s can be seen parked at the Akhtubinsk Air Base that have likely participated in the war on Ukraine, though why the ministry drew that conclusion remains fuzzy.

As the Warzone has pointed out, Akhtubinsk is not the only known Su-57 base as the U.K. suggests, but more importantly, the fighter’s presence there isn’t necessarily indicative of its use in Ukraine. The 929th State Flight-Test Center at Akhtubinsk’s role in the Russian military is to test and evaluate new aircraft and systems, meaning it’s possible the fighters are there for more run-of-the-mill testing operations.

But just because the U.K. didn’t offer up more conclusive evidence doesn’t necessarily mean it doesn’t have any: instead, it may simply be choosing to keep those details, and their sources, close to the chest.

According to UK intelligence, the Su-57 is likely staying in Russian airspace and deploying long-range weapons

Despite the Su-57’s claimed stealth capabilities, U.K. intelligence suggests the Su-57s participating in the war in Ukraine are not actually entering Ukrainian airspace, and are instead being used to deploy long-range weapons at Ukrainian targets from within the protection of Russian airspace. This approach would be in keeping with similar reports about other expensive Russian aircraft, including the Su-35S and a number of Russian bombers.

This would give Russia the ability to claim that Su-57 participating in combat operations for the sake of pushing foreign sales, while not actually placing the aircraft at risk of being downed by the dated Soviet air defense systems operated by Ukrainian forces — or worse, by an American Patriot system once those are deployed.

“Russia is highly likely prioritising avoiding the reputational damage, reduced export prospects, and the compromise of sensitive technology which would come from any loss of FELON over Ukraine,” the British MoD wrote.

Can the Su-57 help Russia win this war?

The short answer is no. Despite Russia’s lofty claims about the Su-57, the aircraft itself exists in such small numbers that it offers very little in terms of added combat capability to Russia, especially when only being leveraged within Russian airspace to deploy long-range weapon systems.

However, if the Su-57’s sensor-fusing avionics suite is actually completely up and running, something the RAND Corporation has called into question following sanctions placed on Russia after its annexation of Crimea in 2014, it could potentially offer a valuable means of intelligence gathering and combat coordination over Ukrainian battlefields.

However, as it seems likely the Su-57’s avionics suite may be incomplete, or may only be complete in a small number of aircraft, in conjunction with Russia’s overall risk-averse approach to leveraging its relatively few expensive combat aircraft in this fight, it seems unlikely the Felon will see any serious use in Ukraine any time soon.

Instead, it seems likely that the Su-57’s use in Ukraine will be remembered similarly to the prototype Felons deployed to Syria in 2018, where they may have fired Kh-69 missiles for publicity footage before departing once again for safer pastures.

Russia’s Su-57 may be the least capable 5th generation fighter in service today, but it still may be a broadly capable platform. However, because it exists in so small numbers, it seems unlikely that Russia would risk the embarrassment or the financial burden of losing one — even as the war in Ukraine drags on toward its year mark.