BRRRRT: Why the A-10 Warthog Hasn't Been Retired 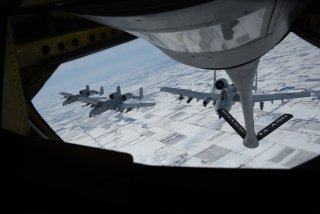 Here's What to Remember: Since the late 1980s, the USAF has pushed to retire the A-10 but the plane has avoided permanent grounding.

The A-10 will continue to fly in support of America’s ground forces, thanks to the quick passing of the 2020 National Defense Authorization Act.

The aircraft, which has not been manufactured since the early 1980s, is useful to the U.S. but is showing its age.

Just two years ago, nearly half of the A-10 fleet was grounded.

The spending plan will include money for new wings, as well as other upgrades.

“The A-10 Warthog has immeasurable value to our U.S. troops on the ground and plays a critical role in our military strategy in the Middle East and around the world,” AZ Rep. Ruben Gallego said. “I’m glad that we were able to keep this fleet fully operational, and I will continue to fight to preserve this aircraft to ensure that the warfighter on the ground gets their air support.”

Since the late 1980s, the USAF has pushed to retire the A-10. The plane has avoided permanent grounding because of its combat performance, desirability by friendly ground forces, and legendary track record.

According to The Aviation Geek Club, the A-10 will serve well into the 2030s.

Due to the defunct status of the original manufacturer, Fairchild Republic, the aircraft is now supported as a legacy platform comprised of Boeing, Lockheed Martin, and Northrop Grumman.