Bullet Sprayers: 5 Most Complex Guns to Ever To Go War 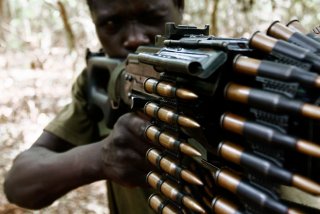 Key Point: These firearms are some of the worst. They may look cool, but they are too prone to breakdown or are difficult to maintain in the field.

When a military and police force picks a gun, they generally pick the least complex design that can fulfill the requirements. History is filled with failed prototypes that were better in some ways than the adopted rifle but were simply too complex for the end user and logistical services.

But sometimes, complex guns make it through. Here are the top five most complex guns ever approved for adoption by a military.

For the end user, the P7 is a simple pistol. Squeezing the grip cocks the pistol’s striker and makes it ready to fire. Releasing the grip resets the striker and returns it to safe. The grip also functions as a slide release after the gun locks open.

But behind the simplicity of the controls lies an extremely complex weapon. The designers at H&K used a gas-delayed blowback system in the pistol, where gas from firing was tapped into a piston which prevents rearward motion of the slide until the bullet has left the barrel, which allows gas pressures to drop in the piston.

This tiny piston below the barrel, in addition to the “squeeze-cocking” mechanism in the P7’s small frame, makes it incredibly mechanically complex. Even the .32 ACP version of the pistol, the P7K3, which doesn’t use the gas-delayed blowback system, is complex, as a hydraulic recoil buffer is installed in place of the gas piston.

Anecdotally, assembling a fully disassembled P7 without diagrams or instruction has been used as a test for some armorers.

The P7 was originally designed for German law enforcement and saw somewhat wide adoption among small organizations worldwide. As of 2018, it is still in service in some German states (primarily Bavaria), although more recent and simpler pistols have been replacing them in service.

Italy’s WWII light machine gun/automatic is widely considered to be one of the worst machine guns of the war, and for good reason.

The weapon is needlessly complex, featuring two sets of feed lips, a cartridge oiler, and a massive firing pin that’s controlled by a relatively simple sear at the very rear of the LMG. The primary flaw of the gun is the large fixed magazine attached to the right side of the gun.

The complex design of the Breda meant it was hard to disassemble and clean, and some operations such as reloading a partially empty gun could become very complicated as rounds would be found “floating” between the two sets of feed lips in the gun.

Other flaws included the receiver-mounted sights, which meant the quick-change barrel system was nigh useless as barrels could not be zeroed individually and the closed bolt action resulting in ammunition cookoffs in the chamber.

The Breda was used by the Royal Italian Army during WWII and was rapidly ditched afterward.

The German FG42 automatic rifle, while far more successful than the Breda, as also a highly complex weapon.

Meant to take the place of three weapons—LMG, infantry rifle and submachine gun—the FG42 incorporated a ton of features to fulfill all of these roles.

In order to function properly as an LMG, and to avoid the disastrous closed-bolt cookoffs that the Breda suffered, the FG42 transitions from operating as a closed-bolt gun in semi-automatic to an open-bolt gun in fully automatic.

A bipod was built into the gun to further facilitate its use in the LMG role. A small spike bayonet was also issued with the gun, as it was meant to replace some Karabiner 98s which had bayonets. The stock was designed with a spring inside to reduce the recoil of the 8mm Mauser round.

Scopes were even made and offered as an attachment for the FG42.

As a result of all these attachments, the FG42 is a very complex gun. Surprisingly, the complexity didn’t adversely affect the reliability of the FG42, but it did make it incredibly expensive and time-consuming to manufacture.

Switzerland’s first self-loading rifle, the Stgw 57, is in many ways a more complex cousin of German roller-delayed blowback rifles.

This should be expected, as its designers took a hard look at German WWII machine guns such as the MG42 before designing the Stgw 57.

But in the design, there are plenty of “Swiss” twists, aimed at making the rifle last longer and be more durable, at the cost of increased complexity and parts count. The surfaces in the receiver on the Stgw are replaceable, unlike the recesses in the receiver for German guns. The recoil spring assembly is also rather complex, comprising three springs surrounding a plunger in a tube. The multiple springs reduce the amount of “bounce” the bolt will have, compared to a single recoil spring.

There’s also a myriad of other small features that make the rifle uniquely suited for Swiss service: a fold-down winter trigger and a charging handle retained from earlier Swiss bolt actions.

Because of its complexity and the high standards of manufacture, the Stgw 57 was one of the most expensive service rifles to produce.

The G11’s operation is simple in theory. The rotating drum bolt is loaded with a cartridge when the chamber is facing upwards. The chamber then rotates down 90 degrees so it is in alignment with the barrel, the gun fires and then the process repeats.

But the mechanisms used to accomplish this simple task are very complex. H&K’s G11 utilized a gas piston to drive this rotating drum mechanism, which also used a series of gears, cams, tracks and fingers to complete that cycle.

In addition to the basic action in the rifle, the G11 also incorporated a counter-recoil mechanism and the “hyperburst,” a special setting which would result in three rounds being fired at a very fast cyclic rate, even before the shooter could feel the recoil.

While it was approved for adoption by the Bundeswehr after passing soldier trials in the early 1990s, financial difficulties from the peace dividend lead to the G11 being abandoned. However, of all these guns, the G11 is perhaps the most mechanically complex of any of them.