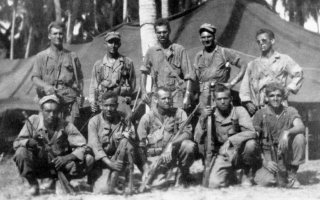 Pacific theater, late 1944. Allied forces have been gradually uprooting the Japanese forces and pushing them back to Japan.

As its foothold in the Pacific shrinks by the day, the Imperial Japanese Army is getting desperate. Already the Japanese have shown a willingness to fight to the last man, an echo of the country’s ancient martial tradition.

However interesting to the outsider the Japanese warfighting culture might be, it bellies a darker side; a side full of disdain and often unfathomable brutality against a defeated foe, regardless of if it’s a civilian or a prisoner of war.

In December 1944, Japanese troops burn alive and shoot 139 Allied prisoners of wars, many of whom were survivors of the Bataan Death March and the desperate fight at the Corregidor, in the Philippines’ Palawan province.

A handful of Americans manage to escape and join the Filipino guerillas. Through them, they succeed in getting the word about the massacre to the approaching American forces. The intelligence makes Allied commanders realize that Allied prisoners of war in several other camps in the region face imminent execution.

They decide to rescue them.

A daring raid of the Cabanatuan Prison Camp

Cabanatuan is the largest internment camp in the region, housing over 5,000 prisoners of war at its peak. By January 1945, there are approximately 500 Allied troops held there.

The hostage rescue force is comprised of approximately 120 Rangers and Alamo Scouts, a special operations unit, and about 200 Filipino guerillas. To get to the camp, the rescue force will have to march 30 miles through enemy lines, no small feat considering the size of the force. The Filipinos’ knowledge of the area and the friendly local population somewhat simplify the logistics of the movement.

Led by Lieutenant Colonel Henry Mucci, commander of the 6th Ranger Battalion, the raid force is divided into two elements. With 90 men, the assault element will storm the camp through the main, kill any Japanese who resist, and rescue the prisoners. The 30 men of the support element will flank the camp from the east and destroy several guard towers and provide fire support where needed.

Two additional elements, primarily comprised of Filipino guerrillas with some American commands to help, set up blocking positions to the east and west of the camp to hold off any attempt by the Japanese to interfere with the rescue.

A P-61 Black Widow aircraft, which is designed for nighttime operations, will signal the attack with an overpass of the camp in order to distract the Japanese guards.

The P-61 succeeds in distracting the Japanese guards, allowing the rescue force to approach the camp without getting detected. In a matter of minutes, the American commands overwhelm the Japanese guards and rescue the prisoners, many of who can’t walk following years of forced labor, scant rations, and brutal punishments.

The two blocking positions stop several Japanese relief attempts, killing numerous enemies and destroying several tanks, before collapsing to the camp, where the rescue force has evacuated anyone they could find.

Rescuers and rescued make their way back through enemy lines, using several wagons and stretchers to carry those who can’t walk. After a dangerous and soul-draining forced march, the whole force arrives in friendly lines the next morning. Mission success.

In the Cabanatuan Raid, the American commandos rescued 489 prisoners of war and 33 civilians, while suffering four Americans killed in action (two commandos and two prisoners) and four wounded.

Among the Rangers who took part in the raid was an officer named Arthur “Bull” Simons, who was the executive officer of the 6th Ranger Battalion. Simons would go on the become a legend in the US special operations community and play a key part in the Son Tay hostage rescue during the Vietnam War. Today, the US Special Operations Command recognizes one of its members every year with the Bull Simons Award.